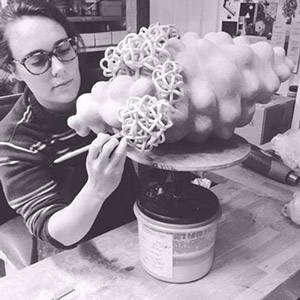 I am committed to the challenge of hand-building in clay, using various techniques to create complex ceramic sculptures. The often overlooked detail of bone, cloud, crystal and microscopic structures are observed as a starting point to developing pieces which possess a curious ambiguity. I aim to fix un-graspable states such as fleeing cloud formations which represent the both the ideal and the perishable, signifying doom and fantasy. The strange otherworldliness of natural phenomena transports me away from the mundane and I become excited when fixed ceramic form seems alive, evoking awareness of life’s impermanence where not all makes sense. I am fascinated by the disruptive dynamism created when repetitive growth patterns in living systems mutate as this produces tension.

Grouping sculptures enhances their unique persona as they form a dialogue, which generates an atmosphere of congruence and conflict. Contrast assists in generating an awkward air where geometry and irregularity, order and chaos, soft and hard evoke awareness of the impermanence of human emotions. Voluminous cloud shapes exploring the theme of space pushing out are juxtaposed with opposing harsh mesh structures that reveal the internal. This relationship between internal and external relates to receptacles and the body where the void is a life force. Time is devoted to glaze testing and multiple firing. Equally through use of rich glaze surface and three dimensions, pieces develop depth of character.

Tessa Eastman is an award winning British ceramic artist with over twenty years’ experience of working with clay and glaze. She lives and works in London UK. She graduated from the University of Westminster in 2006 with a BA Honours in Ceramics, and in 2015 gained a MA in Ceramics & Glass from one of the world’s most reputable design schools, The Royal College of Art. Tessa’s work appears curiously alive with movement. Building her shapes by hand, she draws inspiration from organic form as seen through a microscope. Her dynamic work is at the vanguard of the British contemporary ceramic art scene, known for it’s originality, skill and a daring approach to the art form. Tessa’s meticulously hand built cloud bundles and complex crystal formations have found a serious following among collectors, gallery owners and ceramophiles alike and her sculptures have been commissioned and presented by the financial firms Abacus and Gresham Private Equity.

Tessa won the Craft Emergency Award, with an exhibition at Aspex Gallery (Portsmouth, 2016). She has been exhibiting the in UK and internationally since 2005 and notable shows include Puls Contemporary Ceramics at Gallery Puls (Brussels, 2017) and Collect Art Fair (London, 2017-22). Her work has been selected for Biennials including the British Ceramics Biennial at the Old Spode Factory (Stoke-on-Trent, 2015) and the Gyeonggi International Ceramic Biennale (Korea, 2017). Tessa has been teaching since 2005, currently working at The Kiln Rooms, studios providing professional development and Heatherleys, one of London’s oldest Independent art colleges where all tutors are practicing artists.