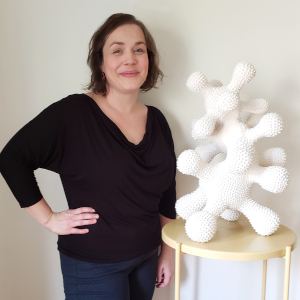 My current work approaches the subtleties of living, defined by form, movement, colour and texture. The exploration of complexity and uniqueness of movement within my forms fuels my momentum and motivation to create. Each work, through the contours of the body and the placement of the appendages, captures movements which are compelling in their peculiarity. Highly textural and seemingly organic surfaces are utilized to invoke a belief we are experiencing a kind of mimicry of life. In my attempt to fix a moment or movement in time, I am interested in how we perceive and assign qualities of both the object and the organic to the works through our perception of life.

Toni Losey, is a Ceramic Artist working in the city of Dartmouth, NS, Canada. She received her BFA focus on Ceramics from Nova Scotia College of Art & Design University (NSCAD) in 2017. While there she drew upon her 15 years of experience as a studio potter to develop an exciting body of sculptural work. Her work has been shown at SOFA Chicago, NCECA, and in several public and private galleries. She was named one of Ceramics Monthly Emerging Artists 2020. Losey has taught workshops and classes at NSCAD and several other studios throughout Canada. She now shows her work internationally in several galleries in the United States, as a participant in Ceramics Art London and has an upcoming show in Belgium.