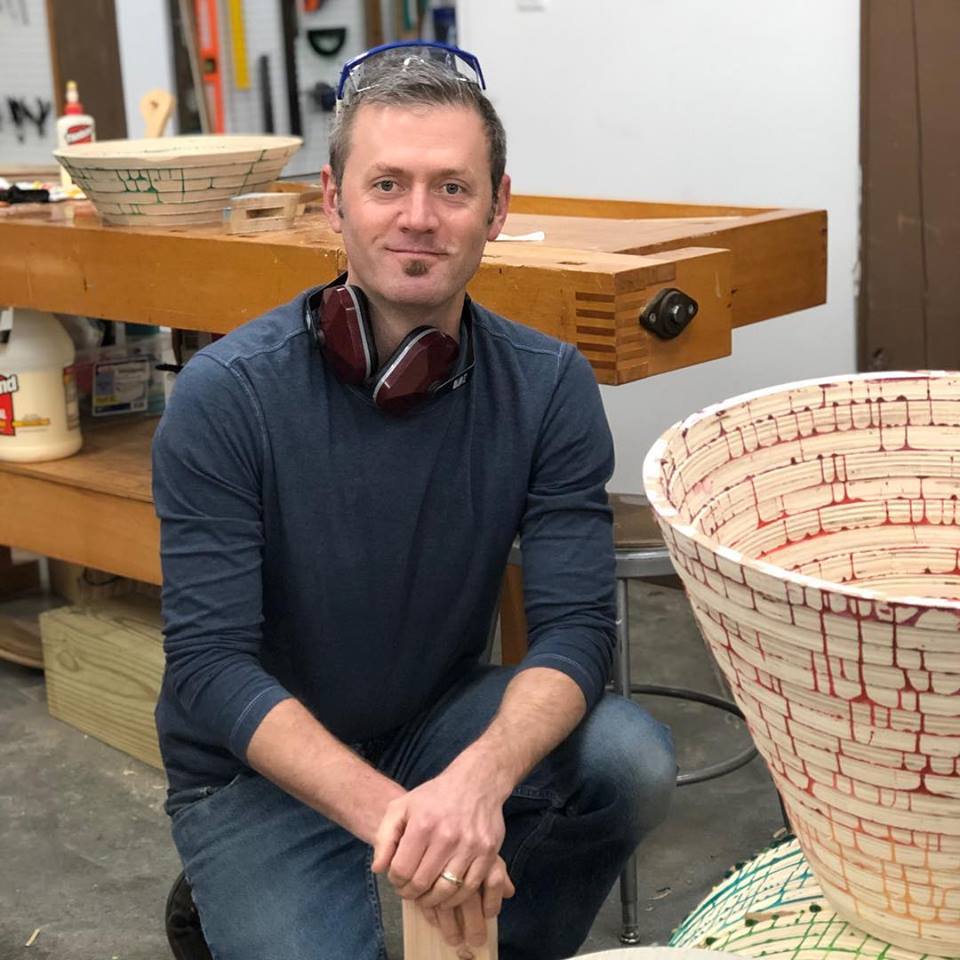 I built this, I exist! Now I’ve re-built this......... and it’s useless. Sketched, built, carved, drawn-on, dis-assembled, rebuilt, painted, tethered, clamped, tinkered-upon and appearing as function-less vessel forms (some of which have been evolving for over a decade), these sculptures play off the forms of tools, toys, and boats and have layers of mark-making and painting that contribute to the building of a vague history. Some are based around the idea of a failed ark. And they aim to be (in their own idiosyncratic way) well-made and innovative in form. Perhaps they are beautiful. These process-oriented works take a winding path to completion, evolving from continuously redrawn sketches and traveling through many transformations before being cut apart, reassembled, and reworked. Parts are often transplanted, left behind, or recycled. Curious inspection and patient observation reveal previously unseen drawings and room-like interiors, many with small chairs and ladders that suggest a narrative of previous inhabitants. It’s not lost on me that my studio is the garage. And I’m in the studio at night tinkering with memories and thinking about the things that men build. Have we built good things? Am I building a good thing? Is this personal and artistic self-doubt? Well, partially. But more importantly, I hope the work communicates a serious and intentional examination of the creative act and of the nature of “building things” in general. Then again..........it could just be about the joy of making (and re-making) (and re-contemplating).

Travis Townsend builds and rebuilds wood and mixed media sculptures in his Lexington, KY studio. His process-oriented works evolve from sketches and travel through many transformations before being cut apart, reassembled, and reworked (sometimes many years later). Parts are often transplanted or recycled.

Travis studied at Kutztown University (BS) and Virginia Commonwealth University (MFA) and has presented solo exhibitions at The Parachute Factory, Washington State University, Manifest Gallery, Doppler PDX, Southwest School of Art, Weston Gallery, and the New Arts Program, among others. His works have appeared in the publications New American Paintings, The Manifest International Drawing Annual, and The Penland Book of Woodworking. Recent group exhibitions include Converters at University of Southern Indiana, Small Acts: The Craft of Subversion at the San Diego City Gallery, and We All Declare for Liberty at Quappi Projects.

His awards include a residency at Penland School of Craft, an Emerging Artist Grant from the American Craft Council, a fellowship from the Kentucky Arts Council, three sculpture grants from the Virginia A. Groot Foundation, and recent travel grants from the Great Meadows Foundation. He runs the visual art program at East Jessamine High School and has previously taught at Eastern Kentucky University, Shakerag Workshops, Anderson Ranch, Arrowmont, OCAC, Peters Valley, and Penland.