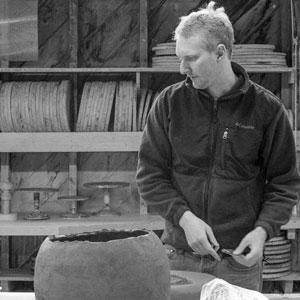 At the western edge Pennsylvania there is a small park where I have spent a great deal of time. This craggy landscape, scattered with bus sized boulders, is aptly named Moraine State Park. A moraine is the accumulation of rock debris deposited by a glacier. Being in this space, you are made aware of the deep geological history of our earth, and the slow churning of the ground beneath, forming.

I think that making pottery is like this…walking through one of man’s oldest and most fundamental creative and self-realizing traditions. Walking on the surface of the earth, in the dirt and the mud, just to see you footprint left behind you. Or to discover a dark cave carved out by a calm stream over centuries; to see your finger print in the throw marks on a soft bowl.

I was taught that the mystery, or the spirit, of a pot is held inside of it. This is an old notion, in old media, and is as timeless and important as ever. I think that the promise of making a pot is simply in that we can do it. Using what is in us, we can literally shape the space around us. The inside of a pot is a reminder of where that possibility rests. In my Aluminums series, I am burrowing into this interior space, spelunking.

The works are made by blending wheel thrown processes with lost wax casting methods. I begin by throwing voluminous porcelain forms on the potter’s wheel, typically using the stacked bowl construction utilized for making “moon jars.” Once the forms are leather hard, I fill their interiors with a thick layer of casting wax, then remove the clay so that what remains is a registration of the interior of the original vessel. The waxes are then invested into ceramic shell and melted out to make space for aluminum. In the casting process, I intentionally cause core shifts to utilize the liquid quality of the molten aluminum and the geological craggy nature of the ceramic shell. The final artworks are visible remnants or these materials: forming, pouring, melting, dissolving.

Trevor King is a visual artist working in ceramics, sculpture, and video. Born in western Pennsylvania, King witnessed the regional transformations associated with post-industrialization. King’s art practice is motivated by a desire to document these shifts, formulating projects relating to identity, labor, art, and entropy. His poetic observations grow from his own biography, oral histories, material culture, and process.

King received a BFA from Slippery Rock University (2011), a MFA from the Stamps School of Art & Design at the University of Michigan (2015), and studied at the Academy of Fine Arts in Poznan, Poland (2010). King worked as a Studio Resident Assistant at Touchstone Center for Crafts in 2012 and has been a resident artist at Ox Bow School of Art, and Haystack Mountain School. In 2014, King was awarded an International Institute Fellowship to work under British sculptor Antony Gormley. In 2015, King’s work was awarded an Outstanding Student Achievement Award from the International Sculpture Center. King is currently an Instructor and Studio Technician at Adrian College and teaching at the Ann Arbor Potter’s Guild.