Virginia Eckinger - "In Defense of" 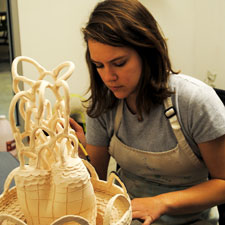 My process begins with a bodily sensation. Whether it is the impression of being squeezed too tightly, pressed in a corner, or heated by embarrassment, I channel these perceptions by compacting them into clay form, modeling and refining until the object embodies the original sensation. Rather than direct translations, these objects are fictive elaborations; they are a respite from the literal, an intangible reinterpretation of reality.

Slump, crack, split, explode, stretch, shrink, bloat, compress. The human body and clay share many similar physicalities. The surface treatments become the skin, coating and containing the delicate ceramic object within. The modes of display become their sparse environments, the interaction between the two creating a dialogue between self and support.

Virginia Eckinger is an Artist-in-Residence specializing in clay at Craft Alliance Center of Art + Design. She received her BFA in Sculpture at Washington University in St. Louis and her MFA from the University of Alabama where she continued to teach post-graduation as an Adjunct in the Department of Art and Art History in The College of Arts and Sciences as well as the University’s Honor’s College. Originally from Birmingham, Alabama, Eckinger also co-founded The Grocery, an artist studio and exhibition space in Northport, Alabama before relocating to St. Louis. She currently teaches Craft Alliance’s community outreach and educational programs and is the Clay Studio Manager at Craft Alliance’s Grand Center location. Eckinger is currently exhibiting nationally.