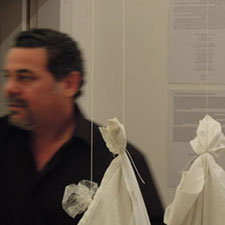 I need to feel and to capture life in front of my eye; actually I have the desire to grasp every thing that penetrates me through the eye and the skin.

In every moment an idea is evolving, each idea is able to cross to art.

How to manipulate the idea in order to become an idea that has established on the relationship of the shape with the thing and the thing with the shape in a frame of visual and constructional trends.

Destruction is well known to me, it is the sensational experience and the vitality that pushes me towards various trends, from this point a concept is presented which is using the concept to express the idea, materials for building the idea, abstraction in executing the idea, and repetition in order to inter the idea's system.

From this point I start to ask questions …. Why I choose this style to express my thoughts? Why I choose this material? Why I attack the work surface with lines and additives? Why I respect my work? …All these questions keep on struggling inside me while I am working in the middle of jam-pack of things and shapes around me.

All these are observing the harmony inside the moment. That’s why my art work does not grow according to a previous intellectual plan but it generates by instant intuition decisions resembling in making a numerous number of artistic pieces that are accomplished in a long period of maturity and development which allow changes to take place normally and spontaneously.

Waleed Qaisi was born in Baghdad, Iraq 1963, where he started his art path as a reader of poetry, novels and art. He pursued his interest and passion in art at art centers in 1980 and through higher education and graduated from the Fine art ceramic department in 1985.

Waleed first presented his art vision to the art scene in Iraq by declaring “the form deconstruction, rebuilding and representing it in different ways and freeing the clay from its restrains” because he rejected all the teaching rules and traditions. This was presented also through his first exhibition with his friend in 1983 at Tahrer gallery in Baghdad.

Then he presented his graduation project using earthenware glazing technique and firing in electric kiln with the theme “Presenting beauty through ugliness”.

During his art studies he worked with Tariq Ibrahim -his professor- and a ceramist to execute huge murals and installations.

After graduation Waleed had to enroll in the compulsory military service but he continued participating in the art scene through group and solo exhibitions and earned many awards (19831993) also he has participated for the first time in an international visual art festival (1986-1988) in Baghdad.

Then he built a traditional old “Sumerian” Iraqi kiln called (Kura) fueled by oil to fire his work.

After the end of the first gulf war 1988 he researched more about the material (Clay). As a result his art vision became deeper and more mature; hence destruction as a meaning and as an action had changed for him.

After serving in the second gulf war 1990 and its disastrous end that shocked him and made him a strong rebel toward everything around him, then Waleed decided to leave Baghdad to Amman- Jordan. In Jordan he worked and established a ceramic factory with a partner. There he grasped new experience in industrial ceramics and marketing the art work. During this period he also established a ceramic studio for the Orfali gallery and taught ceramics there and at private secondary school.

The main concept of Waleed’s work is based on abstraction and expression through this creative clay and through his studies and readings and all of these is related to thinking and to a vision that stands on destruction of material and soul.

In 2001 he moved to Qatar to lead and to teach ceramic art for youth at an art center where he taught Qataris and foreigners through this vision (thinking, making, learning). During his living in Qatar he travelled many times to many places to view and to read the international art scene live; while he considered those art masters as his idols during studying like” Robert Rauschenberg, Peter Voulkos, Don Reitz, Rudy Autio , Antoni Tàpies , Eduardo Chillida , Joseph Beuys , John Cage ” whom their ideas and work had touched and met his heart and thoughts.

Also he has been invited to participate in many international group exhibitions and biennales in USA, Germany, Spain, France, China, Australia, Greece, Belgium, Turkey, Jordan, Egypt, San Dominican, Qatar, UAE, England and Morocco through this period (1996-2013).

Also he has completed projects during art residencies in Denmark titled “My Journey”, Japan “Beauty and Magic”, Italy “What do you see through windows?”, in Spain “Figures” and Ifitry- Morocco “Letters from Baghdad to the world”.

Waleed has given workshops of ceramics and mix media at GENDO in Tolne- Denmark and Qatar.