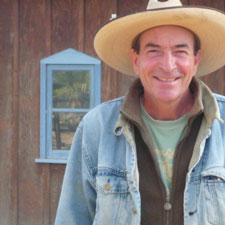 At the dawn of mankind primitive peoples fashioned clay objects. They sculpted about what they knew and wanted. Pregnant women and animals were the hot topics of the day. I think of my work much the same way. Though the topics may be different I feel a link to those ancient people sitting around playing with this beautifully plastic material.

Wesley Anderegg was born in Phoenix Arizona in 1958. He earned a BS degree in geography from Arizona State University, where he began his education in ceramics. Subsequently, he studied ceramics at the Anderson Ranch Arts Center in Snowmass Village, Colorado and at the Archie Bray Foundation in Helena, Montana. He was a resident artist at both places.

Wesley’s exhibition history is impressive by almost any standard. Over the last 26 years, he has had 22 solo exhibitions, and participated in countless group exhibitions and art fairs all across the United States. In addition, his work has been featured in Lark Books’ highly successful catalogue series three times – “500 Ceramic Sculptures”, “500 Clay Figures” and “ The Best of 500 Ceramics”. His work has also been featured in “Confrontational Ceramics: The Artist as Social Critic” by Judith Schwartz, “A Potters Handbook” by Glenn Nelson and Richard Burkett, and “Handbuilt Ceramics” from Lark Books. His work has also appeared in “Ceramics Monthly” and “American Craft.”

His work is already held in numerous public collections including the Renwick Gallery at the Smithsonian American Art Museum, the Archie Bray Foundation, the Mint Museum of Craft and Design, the Fredrick R. Wiesman Museum in Minneapolis, Minnesota, the Columbus Museum in Columbus, Georgia, the Crocker Art Museum in Sacramento, California, and many others. He’s won awards at the Centennial Celebration at the University of Kansas and the San Angelo Ceramic National in Texas, in addition to various other accolades in institutions across the country.

He has also curated exhibitions of ceramics and has lectured at UCLA, the Anderson Ranch Arts Center, Columbus State University and the California Conference for the Advancement for the Ceramic Arts.

Wesley Anderegg lives and works in Lompoc, California with his wife Donna and his daughter The Izzy.