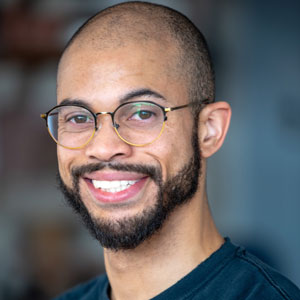 Through clay I explore the concepts of human identity formed as a result of experience and time. Through careful examination of one’s past the multiplicity of lived experiences can begin to be understood and a deeper meaning assigned. I seek through the construction of my work to convey the attempt to make from many storied surfaces a single composition. I act upon clay with physicality to impress upon its malleable surface a history of force and pressure. Every part is then cut into pieces as improvisation and intuition come to the forefront for the constructing of a new whole. There is a uniqueness as each piece is a conglomeration of the interweaved parts and histories. The final piece with its many sides, textures, and parts is then cloaked in the color black. The final presentation to the viewer is a dark silhouette, leaving the many details to only be discovered through intimate examination.

I, Wesley T. Brown, am an artist from Dayton, Ohio. I work with clay to make both functional wares and sculpture.I was introduced to clay in high school and was drawn to it as a challenge. I was not a natural but worked hard and got a little better. I continued to work in clay at Sinclair Community College where I was able to learn under the teaching of George Hageman. I received my Associates of Art degree in 2012. I moved to Bowling Green State University where I was taught by Clay Leonard, Zimra Beiner, and John Balistreri. It was here that I was able to travel and grow my skills. I went as a part of WVU’s Ceramics in China program to Jingdezhen, China. I worked for a part of a summer at East Fork Potter with John Vigeland and Alex Matisse as well as Daniel Johnston Pottery with Daniel Johnston. I received my Bachelor of Fine Arts with an emphasis in ceramics in 2014. I continued to graduate school at Indiana University, Bloomington. I was under Professors Malcolm Mobutu Smith, Tim Mather, and Christyl Boger. I received my degree in the Spring of 2018. Since then I have been teaching in various cities doing both short and long term residencies, workshops, and artist talks.