My frustration with the limits of time and my desire to manipulate it leads me to create these ceramic vessels inspired by human organs, our tools so we no longer have to fight with time. 2017.

Yuko Nishikawa - In "At Dawn"

I explore the idea of beginning as anticipation for the future and how it relates to the way we experience now. These objects are my expressions of creation and growth, elements that are undefined and incomplete yet alive and mutable. Size varies from 12” (30cm) to 16” (41cm) H. 2017. The base form was first thrown on a wheel and then modified at its soft leather-hard state. Multiple glazes are applied and fired in an electric kiln to cone 5.

Hand-built stoneware with various glazes, fired in an electric kiln to cone 5 and 6. Some pieces are thrown on a wheel first and then modified, others entirely hand-built. Size varies from 8" (20cm) to 15" (38cm) diameter. 2017.

Yuko Nishikawa - The installation view of “The Largest Crop”

A group of ceramic sculptures which reflect the viewer's movements. I was inspired by a Civil-war era warehouse in Red Hook, Brooklyn, NY which used to store cotton - "the largest crop in New York City" as it was called - this work focuses on the people as the vital ingredients for the community today. During the installation the thirteen unique ceramic sculptures were tied to a rope with a nautical knot and then individually hung from the ceiling a few inches off the floor. The base ceramic form was first thrown on a wheel and then modified at its soft leather-hard state. A reflective metallic glaze is applied and fired in an electric kiln to cone 5. Size varies from 9" (23cm) to 22" (56cm) diameter. 2017. 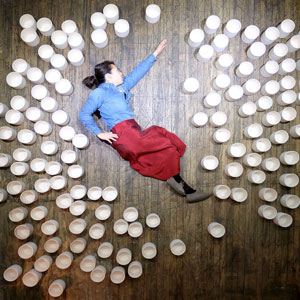 I have conflicting emotions about making art. First, making is a lot of fun, and having fun is important to me. Second, I have an urge to make something, and I feel it is my mission to make something worthwhile. I see myself as one specimen of one given moment of one living thing. Creating is a way for me to make connections among random events and ideas in life. Instead of analyzing and explaining in literal language I want to explore thoughts and emotions through building tangible objects using my hands. Things like frustrations toward time, the memory of a seaside town, a desire to be somewhere else, a strange feeling when facing a medicine cabinet alone in someone else's bathroom.

Originally from Japan, she received her B.F.A. in Interior Design from the Fashion Institute of Technology in New York City. She now devotes herself full-time to her ceramic after a decade of designing lighting and furniture for the luxury home furnishing brand Donghia Inc. where her chandelier and table designs won Interior Design Magazine’s Best of Year Award in 2013 and in 2014. Prior to her role as a industrial designer she worked as an interior designer for leading interior design studios such as Clodagh, Jeffrey Bilhuber and Alexandra Champalimaud.