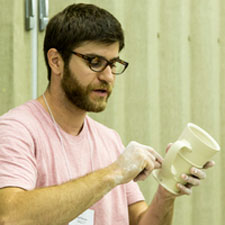 As a potter, I strive to craft a balance between dynamic surface and inviting form. When I began working in clay, the transition from my early studies in painting felt natural as I came to realize the potential in ceramics. I work in cycles, shifting between porcelain and earthenware clay bodies. This practice keeps me engaged and responsive to various material and conceptual developments. The detailed handwork in my pieces serves as a conduit to heighten one’s perception and sensitivity about what a pot can be. Lines, dots, dashes, texture, and color are counterpoised to create structure, movement, and depth. Marks are both blurred and enhanced by the gravitational movement of glaze. Creating utilitarian objects with layered and active surfaces is an outlet for playful yet structured investigation. Essentially, I aim to produce well-crafted functional objects that provide lasting experiences and moments of pause in day-to-day life.

Doug Peltzman is a full time studio potter currently residing in Dover Plains, New York, a rural town on the eastern edge of the Hudson Valley. After several formative years studying painting, Doug came to earn his Bachelor of Fine Arts in Ceramics at SUNY New Paltz in 2005. In 2010, he received his Master of Fine Arts degree in Ceramics from Penn State. He has had the honor of being both a juror and curator of national exhibtions. He has taught workshops at many art centers and universities across the U.S, including Arrowmont, Peters Valley, Goggleworks, Augusta Heritage Center, The Clay Art Center, UNT, SUNY New Paltz, Edinboro University, The Clay Studio and The Art School at Old Church. Doug is also a founding member of Objective Clay. His pottery has been featured in many publications and can be found in homes and kitchens across the country.