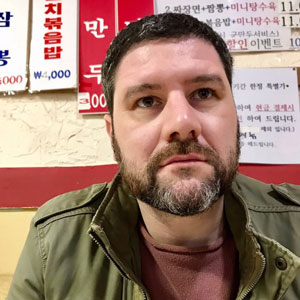 At the center of my practice is the desire to investigate how art and ceramics can explore regions where culture, decoration and craft collide. As a medium Art has developed along with humanity and carries a catalog of ethnographic data. This wealth of symbols, references and semiotic language is all fuel for my practice of engaging objects as a potent tool for cross-cultural dialog and collaboration.

Artists and craftspeople are filters, that selectively collect and distill ideas, images, and artifacts into an output that energizes communities. My work examines how external influences and invisible forces affect the perceptions of places and materials. As an artist I investigate pattern, balance, and stillness at the moment they give way to disharmony.

I am curious about display and presentation how established conventions attained their canonical esteem.

Drew Ippoliti is an artist, researcher and educator currently based in the US.

Born in Salem Massachusetts, Drew received his MFA in 2009 from Cranbrook Academy of Art and his BFA Massachusetts College of Art & Design in 2002.

Drew is the recipient of a 2018 – 2019 Fulbright Scholars Fellowship to Seoul, South Korea where he worked with students at Kookmin University: College of Design, while producing a new body of work. Previously Drew has received the Taiwan Fellowship in 2015, Lighton International Artist Exchange Award in 2015, the China Cultural Research Fellowship in 2012, 2013, 2014, and the US State Department Critical Language Enhancement Award in 2010.

Drew’s work can be found in public and private collections in Canada, China, South Korea and the United States.