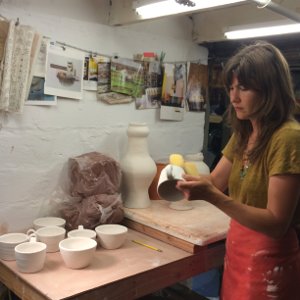 Artist Statement
I am a potter and ceramic artist who creates functional objects that are highly narrative. For inspiration, I look to different moments in ceramic history and incorporate the cultural information I find there with present day social and political experience. Because the history of pottery in the west is divided between industrial capitalism and folk craft traditions, and its objects are so intimately involved with the body either in its creation or its use, more than any other medium, I believe it has the ability to bring into dialogue aspects of the capitalist system, the body and domesticity, and social justice in a palpable, straightforward way that other mediums cannot. Pottery is a reflective, invisible, critical and, for millennia, necessary material object of culture whose very existence is testament to the human being in their environment.

For a long time my work was either much more overtly political or intentionally ornamental without much wider thought going into it, and it wasn’t until after a trip to Staffordshire, England to visit the history and ceramic work of the Potteries, that I found the inspiration for my present work. The first thing that struck me was how the area still retains the remnants and still productive aspects of an industry that during its height was integrated into the lives of every single person living in the area. It was an incredibly polluted and unhealthy place at one time, though now much of its lush greenness hides and grows over the long-abandoned bottle kilns which used to cover the area with a fog of coal smoke. Workers were constantly plagued with lead poisoning, repetitive stress injuries, and horrible burns, including the child workers. It was seeing the remnants of this highly systematized environment of production that made me start thinking about the craft which lay behind these factory workers, and the incredible skill required for much of the products they created. And I became interested in the moment when craft becomes industry, when the logic of the factory takes over the logic of the artisan which was a process that can slowly be tracked over the course of English pottery. My first foray into thinking about this was to try to express the tension of this moment in reverse, by making pots that are not heading towards greater industrial refinement, but instead beginning to revert back to a more expressive, individualistic, and craft-like aesthetic, where the hand of the potter is more pronounced. To me this represents something like the continued effort to reclaim parts of our reality from the logic of production, for the purposes of our own minor voice, our own experiences, since production on the level we experience so often ignores us and our emotional lives, since it always seems to forestall the authentically personal for the inauthentic mass consumer.

Apart from the artisans of these industrial ceramics I also became interested in certain specific objects that they made, like the commemorative plate. Each of these objects has both an overt history (what it commemorates) and an ignored one (what is ignored in that particular historical moment), thus part of my ongoing work is to look into what was happening during the times in which these items were produced, and the reasoning behind their production. I want to know the mechanism by which these plates concealed and revealed their present moment and to do the same in our own time of ignored histories. I began using the commemorative plate to show the uglier side of issues that we are living with in contemporary times. I began to depict walls on plates as a way of confronting the viewer with the reality of daily life as just one of many contentious issues facing our country in the moment. Additionally, I’ve been using the frame of the traditional tea cup and jug to experiment with a blurred or erased scene that alludes to forgotten histories, or perhaps a more dismal time than the typical scene of couples frolicking in meadows.

I have perhaps never abandoned the aesthetic principles I developed with this original inspiration in Staffordshire, but in my most recent work, my concerns have become more expansive and somewhat more performative. For instance, in recent gallery shows, I have built large scale domestic scenes, kitchens, living rooms, foyers, bedrooms to serve as a supportive context for the ceramic work. My intent has been to show how the ceramic object in these scenes are the main focus of an overall narrative that touches on contemporary social and political issues intertwined with personal experiences concerning family, history, abandonment and loss. To me the industrial artisan and the mass consumer are deeply connected and that by making these domestic scenes, I am opening up the expressive possibility of these objects by surrounding them in a setting that has similar concerns, spaces that reflect their return to the hand, return to the human. This is exactly what I tried to do in my most recent shows “Six Towns” and “No Creature Loves an Empty Space”, I wanted to show how objects and their environment reflect one another and allow for the possibility of human emotion to reemerge, emotions like grief and abandonment, that are so easily swept away in our society. This is not to simply advocate for some home-made messy aesthetic but to show how we are ourselves literally home-made, made by our private domestic spaces whatever form they may take.