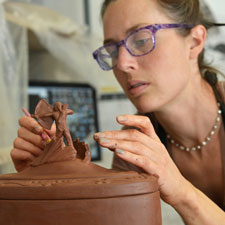 Objects can tell a fantastic story, but simply looking at artifacts of human culture with a scientific view does not always animate the full experience. My romance and longing to make contact with people and animals form other times encourages my desire to utilize extant forms, artifacts, and fragments. By stringing together content via objects and images from different points in history and distant geographic locations I disregard linear time. Within each new drawing and assemblage I am able to explore meaning and metaphor associated with the objects. I utilize this collection to retell stories about specific, people, places, and objects.

Increasingly I can explore an ever-growing collection of virtual artifacts from Museums located round the globe. I find that my desire for those physical things is made stronger, new relationships between virtual and physical space conjure and inspires my imagination. Through the availability of 3D additive manufacturing tools I am able to make physical historic facsimiles of open source virtual objects. The translation that occurs from digital to physical provides added dimension to things and places I thought I knew; it is the future archaeological evidence. Virtual objects are a relevant way to connect to an increasingly global culture. As we dip our minds into perspectives of a global community I find that our hands and bodies crave to fulfill human social instincts. Our desire to touch, and hold something illustrates our own confinement to physical space. As we work to pull the virtual into the physical world it communicates our struggle to balance the artificial kingdom of our making and our longing for the natural world wince we came.

Long meandering motorcycle rides and the nomadic tendencies of Jessica Brandl’s parents cultivated an early desire to wonder about the natural world and those who pass though it. Raised in the privacy of a small acreage situated on a flood plain in the heart of Texas, the quiet of her upbringing propelled her highly active imagination. Seeds sown in the form of vacant properties, fossil filled riverbeds, and a host of snakes, fish, and armadillo kept things lively.

Jessica Brandl holds an MFA in Ceramics from The Ohio State University and a BFA from The Kansas City Art Institute. Her work has been shown nationally and internationally in numerous solo and group exhibitions, including “Unconventional Clay: Engaged in Change”, NCECA Biannual invitational, hosted at the Nelson-Atkins Museum of Art, “Ceramic Top 40,” curated by Leslie Ferrin at Red Star Studios and Office for the Arts at Harvard. Internationally her work has been shown at RISD Rome in collaboration with the c.r.e.t.a.r. Residency program. Her most recent work involves 3D scanning historic ceramic objects and natural history museum specimens. Jessica is a self-proclaimed 21st century naturalist, collecting virtual objects, and practicing citizen science.

Jessica resides in Cedar Falls Iowa, where she is an Adjunct Professor in ceramics at the University of Northern Iowa.