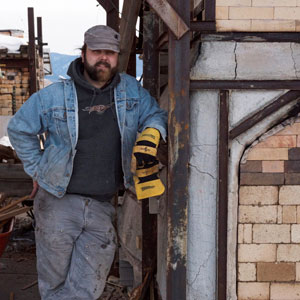 My current body of work explores “home” and how individuals curate personal space in response to their endemic environment. This interest stems from my observations and comparisons of human spaces pertaining to culturally identifiable localities. In this globalized world, our locally available resources are expanding while losing regional identity; yet, our lifestyles are still influenced by larger forces such as the weather which determine what crops can grow and how they are stored. The home and the goods within it reflect the area in which it resides, and the utilitarian wares indicate how the people within that home navigate their environment both practically and aesthetically. By focusing on fermentation, I am delving into my interests in the methods of food storage, preservation and presentation and exploring how these techniques can be globally similar, regionally diverse and individually curated. My pots ruminate on how ceramic vessels play a timeless global role in cultural and individual identity since they are a product of the needs of the people using them.

Bio
Jon Bashioum is a M.F.A. graduate from Montana State University. He received his B.A. in music from Bethany College in Bethany, West Virginia, and was introduced to the medium of ceramics during this time. Afterwards, he was a Post Bacc at West Virginia University in Morgantown, West Virginia. As a Post Bacc, he had the opportunity to study abroad in China where he learned about woodfired porcelain. This influential experience led him to preferring to work with porcelain and finish his work in a woodfired kiln. Following his Post Bacc, he continued on to be an apprentice with Martin Tagseth and a studio assistant to Beth Cavener. These were formative moments in his professional development that allowed him to fine tune his technical abilities. Currently, he is living in Helena, Montana where he maintains his personal studio practice and works at the Archie Bray Foundation Clay Business as the Production Manager.