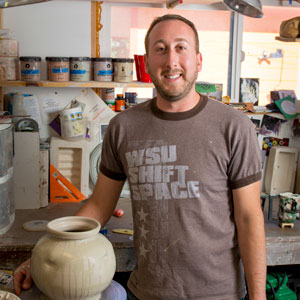 Artist Statement
I am fascinated by the development of structure. With my work, I look to interpret structure and the space it inhabits through physical and emotional layers. My use of color, space, angles and movement are all meant to trigger some amount of emotional discomfort amongst the structural presence. By presenting incomplete junctions of materials juxtaposed with recognizable structural elements, this work is a reminder of the lack of permanence that exists within our constructed realities.

Matthew Eames is a ceramic artist born on Cape Cod, Massachusetts. In 2007, he received his BFA in Ceramics from the University of Hartford. After graduating, he took a residency position at the Worcester Center for Crafts and a year later he began working as a Studio Resident Technician. Matthew then attended a post-baccalaureate program at the University of Arkansas and went on to earn his MFA in Ceramics from Wichita State University in 2013. After graduate school, he moved to the Aspen Valley for the Carbondale Clay Center’s Residency, which transitioned into a full time position as the Studio and Gallery Manager. Matthew has had the privilege of exhibiting in many national shows, including a solo exhibition at the Ulrich Museum of Art in Wichita, Kansas, and an installation for NCECA’s Project Space at the 2017 conference.