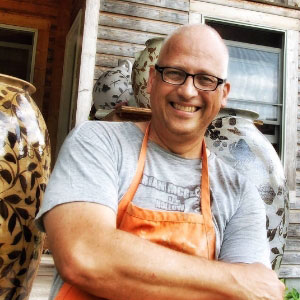 Despite the many tangents that lead me this way and that in the course of making pottery, the ideas, desires and excitement of clay remain very close to those at the very beginning of my career. To be sure, the outcome of experience and effort, trial and error has evolved through the years. But the process still begins with the simple, ecstatic response to a ball of soft clay. Hopefully, the successful pot elicits a similar response in the context of the home.

The mountains of North Carolina provide plenty of inspiration with their wildly exuberant flora, geological variety and the pottery history that sprang from these geological circumstances. Strong pottery form and patterns evoke the complexity of this natural environment. By some combination of optimism and risk, my collaboration with the natural properties of clay and wood fire continues to lead me through this potter’s life, at times exasperating and at others, exhilarating.

Michael Kline has been a studio potter since 1993. After 3 years of civil engineering studies at the University of Tennessee, Michael stumbled into a ceramics class. In his own words Michael describes this momentous event:

“A good friend, who was in art school, invited me to the clay studio for a raku firing (read: party) I remember watching the teacher throw a pot. Like many who see this “magic” act, I was beyond fascinated, maybe even hypnotized. That night I made a pinch pot in the shape of an egg, which I still have. The clay had me in a spell! But for the moment I would return to my engineering school, soon to drop out from a lack of interest and poor grades.

A year or so later, I was encouraged by a good friend to take a pottery class that they heard was a lot of fun. I remembered seeing the potter at the wheel, and remembered that I wanted to try that, myself.

That first night of my pottery class, the first touch of the clay, I knew I was in love.”

He went on to study pottery, painting, and printmaking at UTK and holds a BFA. He also studied under Michael Simon at the Penland School of Crafts in 1989. After teaching pottery the Westside YMCA in New York City he joined Mark Shapiro in Worthington, MA and built a studio and kiln at Stonepool Pottery. In 1993 Michael began his business and created wood fired-salt glazed tableware with a botanical theme in Massachusetts until 1998 when he was awarded a Resident Artist position at the Penland School of Crafts. While at Penland Michael worked on a body of larger scale stoneware pottery inspired by the traditional stoneware of the Catawba Valley and Seagrove areas of North Carolina. At the end of his tenure as Resident Artist Michael designed a kiln to fire his new body of stoneware. The kiln is designed to fire exclusively with remainder/ waste wood from local lumber mills.

In 2015 Michael built an atmospheric vapor/soda kiln which is his current obsesion. He also began a completely new body of stamped and inlaid stoneware inspired by the Korean tradition called “Sanggam”. Michael has written articles for the Studio Potter magazine and writes regularly on his blog, “Sawdust & Dirt”. His work has been published in numerous pottery books, including Robin Hopper’s “Functional Pottery.” He has led many workshops and given presentations of his work at universities and clay centers across the country, including the Penland School. Michael appeared in the 2007 film “Craft in America” which broadcast on PBS.

Michael Kline lives in Bakersville, North Carolina where he is active on social media platforms such as Facebook, Instagram, and Periscope. He is married to goldsmith Stacey Lane and they have two daughters, Evelyn and Lillian.