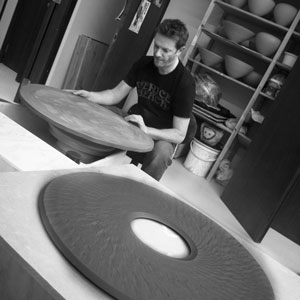 Artist Statement
The praxis of my discipline has always been to create an epistemological awareness within myself. To establish a profound understanding of what I am doing by first taking action, reflecting and re-reflecting upon the action then repeating this sequence until the idea is understood.

Clay, with its legacy of endless transformation, is the perfect substance of metaphor: its limitless possibilities, always willing the maturity and fruition of ideas.

In my work I’m creating sculptures, surfaces and textures that are difficult to date to a specific culture or place: my aim is that the aesthetic is visually striking but also has a familiarity because of the form and application that make the most of the least materials.

The finishes are straightforward yet complex and this creates a dialectic that transcends simple visual appearance, redefining iconic or ceremonial territory. This complemented with the gestalt of the pieces creates a synthesis that gives them an archetypal presence.

The nuanced subtly of optimized simplicity and materiality leads to a contemplative understanding, acceptance and precognitive agreement with the finished works: they literally speak with you.

Michael Rice is an Irish Artist, Designer and Maker who specializes in ceramics and more recently glass. He is particularly interested in firing procedures such as Raku, Smoke and Saggar firing; his work is also is concerned with surface, texture, natural geometry, gestalt principals and archetypal forms.

Michael has a Degree in Fine Craft Design, a Postgraduate Certificate in Education (Art and Design), and a Masters Degree in Multi Disciplinary Design, all from the University of Ulster. His work is exhibited internationally; As an Educator he has taught in Schools, Colleges, Universities and Art centers worldwide and has undertaken artist residencies in the UK, Pakistan, Sri Lanka Dubai and Bali.

Michael is a member of the International Academy of Ceramics based in Geneva and as a writer has published articles in the UK based international magazine of Art and Craft ‘Ceramic Review’, and the Australian publication ‘Ceramics Art and Perception’.

He is the International Academy of Ceramics UNESCO representative for the UAE and exhibited his work as a finalist in the Taiwan Ceramic Biennale at the Yingge Ceramics Museum in Taipei, World Design Capital 2016. His work is now part of the museums permanent collection. He was recently announced as a finalist for the Korean Ceramic Biennale 2019.

Michael is an Associate Professor of Studio Art in the American University in Dubai.