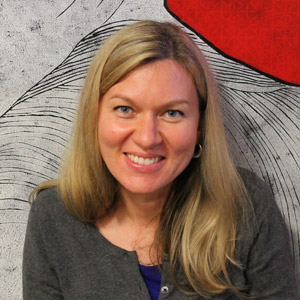 Interplays of graphic lines, silhouettes, negative space, and simple geometric forms: this is the language that I use to transform the visual truth about my surroundings into art. In this I strive to create enlightened objects and to preserve the lasting beauty of momentary impressions, passing landscapes, and familiar environments.

Rūta Šipalytė was born in 1973 in Vilnius, Lithuania. She holds a Master of Fine Arts degree from Vilnius Academy of Arts, where she studied ceramics between 1992 and 1998. Since 1994, the artist has participated in group exhibitions and international ceramics symposia in Lithuania, Latvia, Estonia, Poland, Czech, Belgium, Croatia, Germany, Ireland, Norway, France, Italy, Canada, USA, China, Taiwan, and South Korea. She has also held several solo exhibitions in Lithuania and abroad.

Among her signature accomplishments are a fully funded, four-month residency at the Nordic Artists’ Centre in Dale, Norway. In 2008, Šipalytė was awarded a finalist prize in the Taiwan Ceramics Biennale, which was held at Taipei County Yingge Ceramics Museum in Taiwan. In 2015, the artist received an honorable mention at the 8th Gyeonggy international Ceramic Biennale in Icheon, South Korea.

Since 1999, Šipalytė is a member of Lithuanian Artists’ Association. Between 2011 and 2015 she served as a lecturer in the ceramics department at the Vilnius Academy of Arts. Her works are held in numerous international collections and a number of commissioned ceramic architectural installations can be found throughout her native Lithuania. The artist currently lives and maintains in a private studio in Vilnius.