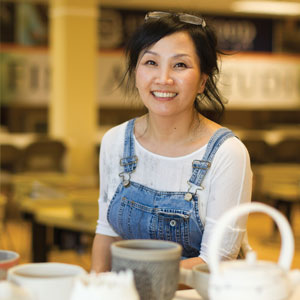 Find a way to communicate

Artwork should not be created for the sake of “art” itself. When I go to a gallery or museum, I observe the people as they view the art. At some pieces they merely glance and pass by, but at others they stop and ponder about the message being conveyed. The longer their observation, the more appreciation they appear to show for a given work. By forcing viewers to accept a fixed message, demanding they agree or disagree with the creator’s intent, the artist fails to communicate effectively. An artist must open a dialogue with their audience.
The most joyful moments of artistic creation are when I express my thoughts, create an aesthetic, project my feelings through clay, and even discover a new technique or style. I seek to draw the audience’s attention, capture their curiosity by asking them to use their imagination, and inevitably allowing them to reach their own conclusions about the piece. By putting my personality into my work and leaving it open to interpretation, I hope to find new ways to have a conversation with my viewers.

Taoist philosophy and the principles of yin and yang are integral to my Korean heritage and thus are infused in my work. The physical artwork itself becomes yang, or the positive space, which joins with the negative space that is formed but not occupied, or the yin, to create totality of the piece. Negative space, regarded as infinite potential within Taoist philosophy, is often ignored, yet forms the indispensable foundation of any positive object. Achieving a balance of yin and yang in art consists of maintaining harmony between negative and positive space, dominant and submissive, light and dark, hard and flexible, rough and soft. When properly done, the result is greater than the sum of the two parts.

I create artwork that harmonizes two positive objects against muted backgrounds. The negative space surrounding them provides vibrant tension and draws forth subtle imagery. These yin properties ask the viewer to look deeper within the work, to go beneath the surface. By elevating the value of the void, I create images apart from the yang, plainly visible in three dimensions.

A small piece of clay

My technique of hand-building with tiny pellets of clay springs from a basic principle that from many can come one. Just as countless small rocks form a mountain and grains of sand form a beach, so I too draw forth an image by bringing together its many pieces. Even the greatest masterworks, such as The Starry Night by Vincent van Gogh, consist of thousands of simple brush strokes.

My work is built one piece of clay at a time. Each bit of clay holds the mundane, my fingerprints, but also the sublime, my mood. Each shows the progress of my work in its journey toward completion. I purposely shape each pellet to symbolize grains of rice, a staple in my native Korean culture. As a child, I often heard, “Don’t waste a single grain of rice, for it is just like wasting a farmer’s hard work and devotion.” A single grain of rice can often be ignored, just as with the negative space around a positive shape. The yin of each pellet of clay draws forth the yang of the final, positive form. Both are necessary to complete the work in harmony.
My goal is to seek balance within my work, and to connect with my viewers. Collectors of my non-functional pieces should look at my art and see meaning. With my utilitarian creations, I am excited to establish a connection with the new owners and feel a sense of accomplishment at the thought of my work being a part of someone’s everyday life.

I am a native of Seoul, South Korea, where I grew up surrounded by ancient traditions of art, architecture, and culture. From my earliest years, I was fascinated by ceramic arts and decided to dedicate my professional life to their pursuit. Upon completion of my undergraduate degree at Seoul National University of Science and Technology, I sought to learn more and advance to a graduate program.

To this end, I moved to the United States in 1993, immersing myself in the study of contemporary western ceramics, receiving a Master of Arts degree from Iowa State University. After graduation I relocated to Atlanta, becoming active in the regional arts community and gaining recognition in national and international art competitions. During this time, I have continued experimenting and refining my technical skills and artistic vision while also pursuing an academic career.

Currently, I am the Academic Director, and an Art Professor at Underwood University in Suwanee, Georgia. My experience at Underwood has taught me the formal business and academic side of higher education while immersed in a vibrant, diverse community of creators. The leadership knowledge gained in my current role has also empowered me to build my own art studio to complement my teaching and academic pursuits.