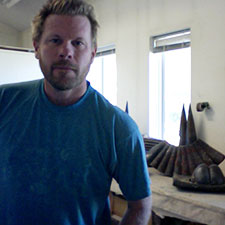 Steve Schaeffer was born in Harrisburg Pennsylvania in 1969. Steven began his education in art at an early age, studying with masters in the field of ceramics in Philadelphia PA. Flagstaff AZ., and achieving his Masters in Fine Arts at Ohio University in Athens Ohio.

Hired in 2005 at Northern Arizona University in Flagstaff Arizona where he currently teaches ceramics as Assistant Professor of Practice in the College of Arts and Letters.

Stevens’s work has been exhibited in more than seventy exhibitions nationally and internationally and is in permanent collections across the United States and the Jingdezen Ceramic Institute in Jingdezen China.

His love for the four corners of the southwest United States is a major influence in his work. “Understanding my environment is an essential motivation for my creative process. Nature is the didactic arena that I seek. Through my studio work I have realized what these experiences are consciously revealing to me.”

In 2007 Steven’s ceramic sculpture was accepted to the “4th World Ceramic Biennial International Competition” in Korea were he received an honorable mention and the NCECA Clay National Biennial Exhibition at the Museum of Art and Craft in Louisville Kentucky.

In December of 2009 Steven traveled to Florence Italy were his work was included in the Florence Biennale. Upon conclusion of the exhibition in Florence the work has become part of a permanent collection in Siena Italy. In the summer of 2012 Steven was the curator of an international exhibition entitled “Across the Divide” that was displayed at the Coconino Center for the Arts in Flagstaff Arizona.