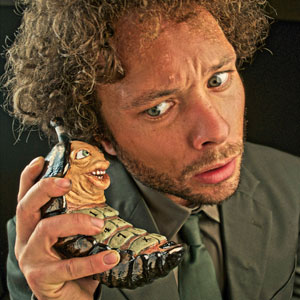 In observing the creations of man and nature I am absorbed by the grotesque and eccentric, as well as the beautiful. I delight in the alchemy of putting creatures and objects together creating systems with their own logical order. I imply a mythology that is informed by our past but is in keeping with our modern circumstances.  As I live my life, I collect ideas, imagery, and objects that fascinate me. From this reservoir I draw the inspiration for my work.  Some of my symbolism is obvious and some more obscure, but all chosen to help process and critique the world around me.  My work is successful if the viewer is filled with the same sense of wonderment that I experience as I try to understand what it is to exist in this place at this time.

Wesley Wright is a Northern California-based mixed media artist and arts educator known for his highly detailed and eccentric imagery. Working primarily in stoneware clay, he addresses environmental and existential issues with humor, grit, and imagination. Wright’s evocative sculptures have been exhibited in galleries and museums across the country including the Glassell Fine Arts Museum in Houston, Texas, and the De Young Museum in San Francisco, California. Wright has work in a number of collections including the Crocker Museum Permanent Collection in Sacramento, California. His work has appeared “500 Figures in Clay Volume 2” and other notable publications. Wright designed and created a community based project in collaboration with Youth Spirit Artworks in Berkeley, California.

After growing up in Berkeley, Wright attended Humboldt State University where he became involved in ceramics and circus arts. He then went on to receive a Master of Fine Arts degree from San Jose State University. Wright has taught at various institutions throughout the San Francisco Bay Area including Santa Clara University, Delta College, De Anza College, the Academy of Art University, Diablo Valley College, and Santa Rosa Junior College. He shares a studio with his wife and fellow artist Malia Landis in Crockett, California.