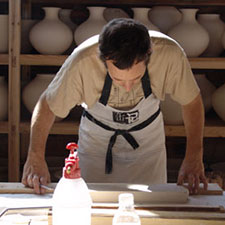 I must, to begin, accept that my life will always be haunted by the specters of loss. And so the objects I create begin at sites of memory and of mourning – a cemetery, the home of a loved one, a childhood playground, or a historical site with emotional or spiritual resonance. I collect earth and objects from these spaces, sometimes leaving what I can in their place and sometimes incorporating the sacrifice of irreplaceable objects into my work. Theses rituals constitute my creative process, they are confrontational and cathartic, and the creation of beauty and art is mostly incidental.

Anthony Stellaccio is a freelance artist and scholar educated in both fine art and folklore. A member of the American Folklore Society, the American Ceramic Circle, and the International Academy of Ceramics, Stellaccio works around the world as an artist, writer, researcher, film maker, curator, and educator. Most notable among his professional accomplishments are two US Fulbright grants, a book on Lithuanian folk pottery, more than thirty articles on contemporary and historic ceramics, three years spent serving the Smithsonian, National Museum of African Art, and several years spent as a consultant for the Lithuanian Art Museum. Stellaccio was born in Muncie, Indiana in 1978, lived in Eastern Europe for more than seven years, and is based in Baltimore, Maryland, USA.