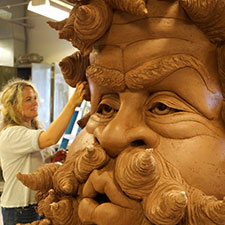 Five years ago, I moved to the mountains. These sculptures are the result of my shifting internal and external landscape. Through this body of work, I am attempting to tap back into a part of my imagination that has been dormant for some time. The part of me that enjoys telling visual stories that reflect on time, family, how we become who we are, and how we are all connected. I am attempting to direct the eye to a range of hidden stories that perhaps reflect what cannot be expressed with words.

Andréa’s work has been featured in a number of national and international publications and she has widely exhibited her work. She has had 17 solo exhibitions in various galleries and museums since 2009, including The Florida Holocaust Museum and The Kentucky Museum of Art and Craft. Andréa also works on large-scale public art commissions such as the See Also endowment commission with the Cleveland Public Library.

Along with exhibiting her work and teaching at App State, Andréa has taught workshops on figure sculpting at various craft schools across the country including Haystack, Arrowmont, and The Metropolitan Museum of Art, NYC.