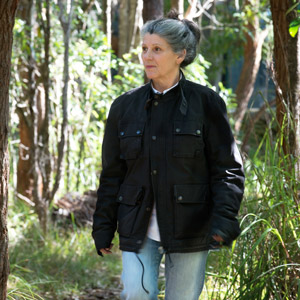 'Connections – land and sea' - my current exhibition work uses the vessel form to explore the meeting place between land and sea, and is inspired by the landscape on the far south coast of New South Wales, Australia. 'The Self Reconciliation Project - as artist-in-residence at the Fremantle Art Centre (February to June 2022) my project focused on the notion of self reconciliation through research into my family history. As one of the first settler families arriving in Quairading Western Australia we were given land-lots while the First Nations people of the region were persecuted. The project re-examines my own 'white' history and my place within it, and focuses on the notion of self reconciliation in relation to politics, racial issues, community attitudes and the laws of the times. Although viewed through a personal lens, it is a national narrative about how we as a society are directly linked to colonisation and our settler history. 'Black + White Porcelain Tableware' - the tableware range was launched at DESIGN Canberra as part of the festival’s open studios. Each unique piece of the mix and match Black + White collection is designed, made and painted to be purchased as single pieces or in sets so craft lovers can add to their collection over time.

Avi Amesbury received a Bachelor of Visual Arts (Ceramics), with Honours from the Australian National University (ANU) School of Art in 2002, receiving the Australian National University Lyle T. Cullen Memorial Prize. She was awarded a scholarship in 2000 through the ANU International Exchange Program and undertook studies at Hong-Ik University in Seoul, Republic of Korea. Her work has won a number of awards in Australia and has been selected for national and international exhibitions including the International Triennial of Silicate Arts, Ceramica Multiplex, the Sidney Myer Fund International Ceramic Award and the Gold Coast International Ceramics Award.From 2010 to 2015 she was the CEO/Artistic Director of Craft ACT: Craft and Design Centre, and was the Founder and Artistic Director of the festival, DESIGN Canberra.