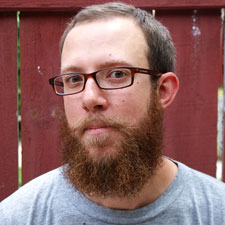 My ceramic sculptures utilize figures and animals. They express observations of the interaction between humans and the natural environment. I am interested in the narrative potential that figures have when paired with specific objects. I strive to evoke disturbing, curious, or uncanny imagery through unnatural groupings or juxtapositions.

Current day environmental issues influence the work I make. I grew up on a 14-mile stretch of the Androscoggin River in Maine that requires an oxygen bubbler to prevent the fish from suffocating. Because if this, I foster environmental awareness. Having lived in proximity to a river that has been partially revitalized, but is still on life support, inspires me to research global environmental problems and models for solutions. This research informs the iconography and characters that inhabit my work.

Iconic figures and conventional narratives, as well as folk lore, are subjects that inform my hand-built ceramic sculpture. I am interested in how icons can act as a surrogate for talking about environmental states. Humor is used as a hook, asking my audience to look at something more serious than initially implied by my playfully articulated works.

Benjamin Lambert is currently a Visiting Assistant Professor of Art and Design at Alma College in Alma, Michigan. He grew up in a small, rural town of Greene, Maine, spending time exploring the woods and rivers around his home. In 2008 he received a B.F.A. with a concentration in ceramics from the University of Southern Maine. He took a four-year break from academia and maintained an active studio practice in Portland, Maine where he was also a part-time associate at the Daniel Kany Gallery. In 2010, he worked as a summer staff member at Watershed Center for the Ceramic Arts, in Newcastle, Maine. He completed a MFA in Ceramics and Sculpture at Edinboro University of Pennsylvania in 2015.