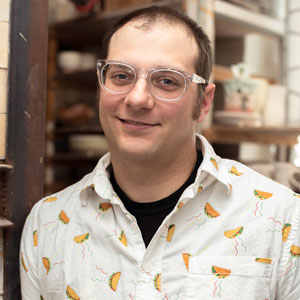 My current body of work seeks to create surfaces that speak of material degradation by exploring how the environment works with time to reclaim the detritus of armed conflict. Furthermore, I am interested in how the use of razzle dazzle patterning, a theory and style of visual disruption primarily used by allied navies during WWI and WWII, can be adapted as a decorative motif for ceramic vessels. Through continual exploration into the intersection of form and pattern, I seek to answer the following questions: how would the graphic dazzle patterning appear if allowed to degrade due to environmental forces and what is the effect, both literally and symbolically, of applying this type of surface to utilitarian ceramic wares?

Atmospheric firing has allowed me to obtain the necessary physical surfaces needed to explore the above ideas. Firing with wood in a reducing environment allows the clay to flash the deep reds, oranges, and grays reminiscent of rusting steel, while the slow erosion of dripping water is recalled in the ashen melted glaze. Additionally, the vapor of a gas-fired soda kiln will attack the siliceous clay body leaving behind a pitted and carbon trapped surface. Ultimately, the lick of flame will flash the clay in ways that speak of the wind and weather-beaten facade of long abandoned structures.

I am a potter and educator living in the suburbs of Chicago with my wife and daughter. After graduating from Northern Illinois University in 2001 with my BFA in ceramics, I moved to Chicago to pursue clay work at Lillstreet Art Center. Over the past 15 years, Lillstreet has fostered my development as a contemporary clay artist, an educator, and leader within its vibrant clay community. I am fortunate to remain rooted within the community by teaching soda firing classes to advanced students. While maintaining a home studio in the western suburbs of Chicago, I study wood firing as a special student under Professor Doug Jeppesen at Waubonsee Community College in Sugar Grove, IL.