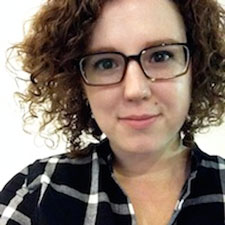 Clay acts as collaborator in my studio practice, a malleable material often determining its own treatment. The connection to the medium, its history, and its plasticity drive my work. I strive to create a balance between my planning and preparations and the accidental and incidental occurrences of the clay process. The character of clay can change, both in forming and in firing, and while experience allows for some certainty, unpredictable incidents often occur. I encourage these instances as they allow for a constant evolution in design.

The challenge of creating work of a significant scale with intimate details is alleviated with the use of repetitive forms, allowing me to add, subtract, and manipulate. The labor of the process allots time to configure the formal elements of each piece into a fluid composition that investigates the space the work is in, creating a balance of organization and intuition.

Christina Warzecha is a studio artist with an MFA in Ceramics and Graduate Certificate in Museum Studies from Northern Illinois University, and a BA in Studio Art from Loyola University Chicago. Her professional museum interests and studio practice align in the interest of broadening the definition of contemporary craft and its role in the exhibition. She has exhibited work throughout the country, including the 2015 NCECA National Student Juried Exhibition where she received the second place graduate student award and the 2016 Midwestern Biennial at the Rockford Art Museum where she received the juror’s choice award. She has received such professional opportunities as summer internships in 2015 at the Museum of Fine Arts Boston and in 2016 at the Kentucky Museum of Art and Craft in Louisville. Christina lives in Chicago, and is currently the gallery director at Rockford University and art preparator at the contemporary Chicago gallery Roots and Culture.