Dan Elborne - “One Drop of Blood”

Dan Elborne - “Where They Burn Books” 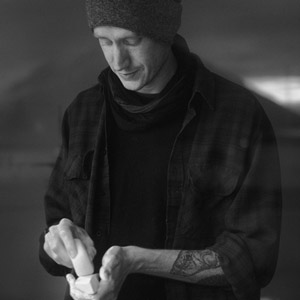 My environment and cultural experience provide the conceptual references for my art practice. The intersection of the personal with overarching historical events further informs the work. Clay, as a material, enables me to respond to issues related to monumental moments in history, which have directly and indirectly affected my family. This is evident in Five Hundred (2016), an installation addressing my Opa’s experience in the Indonesian War of Independence, where he was one of 500 men initially drafted to the conflict.

Primarily working with handmade multiples, I alter the gallery environment with ceramic installations, therefore challenging the viewers’ perception while utilizing the fragile and precious nature of ceramics to reference my chosen topics. My work explores historic and personal experiences, expressed through beauty and brutality. This is achieved with respectful and specific attention to my chosen materials and the installation of each project. One Drop of Blood (2013-2017) is one such project, which originally comprised of 21,000 handmade porcelain white blood cells. This ongoing interactive installation, where viewers are invited to take cells away in exchange for donations to breast cancer research, emulates my mother’s dropping white blood cell count during chemotherapy.

Recent and current projects have been directly responsive to my experience visiting the preserved sites of Nazi concentration camps. These projects include recreations of the objects that most affected me during these visits, such as my installation Arbeit Macht Frei: Work Makes you Free (2014), influenced by my 2012 visit to Sachsenhausen concentration camp. Also related to this history are series’ such as Remains (2014-17), which references animalistic behaviours and heinous medical experimentation during WWII, and Where They Burns Books (2016), which commemorates the 1933 Nazi book burnings. In a broad sense, these projects and the overarching theme of my practice investigates concepts of memorialization, commemorative practices and preservation.

Dan Elborne is an Australian emerging artist based in Toowoomba, Queensland. His preferred working material is clay. Elborne creates ceramic installations and sculpture, which draw from varying points of personal experience and significance. By utilising the fragile, precious and vulnerable nature of ceramics, accompanied by a regard for the broad cultural relevance of the material, and its anthropological employment as ‘ancient record:’ he addresses sensitive historical events as well as cultural and political issues within modern society, while also questioning the role of ceramics in contemporary art practice.

Elborne has exhibited extensively throughout Australia including shows in Sydney, Melbourne, Brisbane and his hometown of Toowoomba. He has also participated in various international exhibitions, which, to date, have primarily been afforded by his participation in a number of international artist residencies within France, Denmark, Iceland and Japan. These residencies have resulted in circumstantial adjustments to his art practice and offered an environment for extensive experimentation with his chosen medium, while also allowing the development of large-scale projects and the invaluable expansion of his creative network.

Elborne has completed a Bachelor of Creative Arts with Honors through the University of Southern Queensland (USQ) in Toowoomba, where he is currently undertaking a Doctorate of Philosophy (PhD) focused on his art practice. He also works as an Associate Technical Officer in the visual arts department of USQ, alongside adjunct lecturing in the ceramics studio of the university.