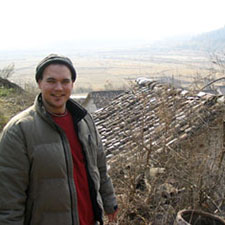 Recently I spent a year as an artist-in-residence at the Pottery Workshop Shanghai, Shanghai, China. During this time I explored new ways of working with the direct and present influence of Shanghai, and China itself, at my fingertips. At first I thought I would continue the work I had created during my graduate studies at Alfred University, however, living in a foreign environment, with the accompanying change of daily life, I quickly decided that the work I had made in the past did not translate to my new surroundings. Instead, I wanted to capture the energy and pace of Shanghai in my studio practice. My approach to making work had to change in order to for new ideas to enter into my creative process. I began by traveling to ceramic production villages in China, mainly Yixing and Jingdezhen. There I collected hundreds of Chinese ceramic everyday wares, responding to their form and repetition. I found the way in which pots were stacked and wrapped in multiples quite beautiful, and those bundles became the structure for my new body of work.

My work activates the imagination through the structure of everyday ceramic objects. By assembling the ceramic objects together into a composition, I am creating an image to trigger a memory trace. I believe the work challenges perceived boundaries of ceramics. I investigate my ideas through distorting known images to create an entirely new one that has little to do with teapots or cups, and yet the reference to the vessel remains, adding a further level to the work. In utilizing mass produced objects, I am interested in challenging the line where hand-made and machine-made intersect.

“A recently completed residency in Shanghai, China, has had a rippling effect on Bare’s artwork. A radical change in direction had taken place in his work in which he had gone from working with large freestanding extruded sculptural forms to smaller assemblages attached to the wall. He had become fascinated with the amount of ceramics produced in China and began buying Yixing teapots in volumes. He then created clay saggars, filling them with powdered kaolin and placing the Yixing teapots in the saggar form. Lastly, he used thick, viscous glaze as a fill material. After the firing, he removed the saggar and was left with an encrusted group of fused clustered teapots. Nestled head to toe, these crustylooking objects were now permanently cemented and resembled antiquities from an archeological dig. Taking these teapot clusters further, Bare inserted a metal rod through the pieces and attached them to the wall of the gallery. The pieces now extended into the exhibition space. By combining unusual materials with an inventive way of displaying the work, Bare forced viewers to look at both sides of the object. I realized later how essential it is for artists to stay fresh by challenging the prescribed ways that we are taught. Bare was able to transcend his learnt pattern of art making.” -- Holly Hanessian, “Encountering Abundance: Multiplicity in Clay”, Ceramics Art and Perception, No. 63, 2006