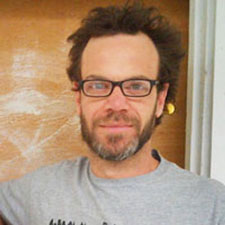 The development of my studio work begins with lists that draw from these momentary occurrences. The lists form as a stream of consciousness with common objects - a houseplant, a book, a common chair – and act as a way of drawing with words, creating imagery through text. The objects compiled on the lists are part of a larger collective memory drawn from personal narrative. The objects are signifiers of a time and a place at once familiar but radically different for each person. As the objects are removed from their original contexts and juxtaposed with others, they begin to form sculptural vignettes that suggest new stories.

Dennis Ritter received his BFA from the Tyler School of Art at Temple University in Philadelphia and his MFA from the New York State College of Ceramics at Alfred University. His artwork examines the foundational relationship of domestic objects and spaces to the innate traits of human recollection and memory. Representational ceramic sculptures are the starting point for his large-scale installation-based works and large format digital photography. Currently, he resides in Rome, Georgia where he is a Visiting Assistant Professor of Art at Berry College. Dennis has been awarded residencies at The Watershed Center for the Ceramic Arts, The Vermont Studio Center, and Tyler School of Art. He has received numerous grants and awards including a Windgate Craft Fellowship, the Rudy Staffel Award for Excellence in Ceramics, and the Kiln God Award from The Watershed Center for the Ceramic Arts.