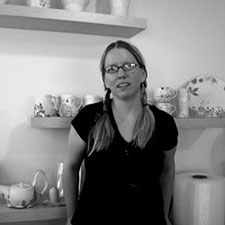 Bringing together influences as diverse as 18th century English transferware, Japanese Oribe pottery, contemporary painting and industrial ceramics, Elizabeth’s pottery embodies a broad interest in the history of art and craft, ancient to industrial. She strives to make well formed, functional objects, with a sensuous surface, and relaxed posture, that record the transformation of material through process. Often functioning as a display piece as well as a utilitarian vessel, her pieces take advantage of porcelain’s affinity for both delicacy and density, and as a ground for luminous color.