2015, porcelain casting slip, oxidation, 4.5” x 4.5” x 4.5” each of seven, photo: Dale Roddick. Moving Forward. This is the first sculptural self-portrait using photography on ceramic decal that led me down the path of discovery of how sepia tones evoke a time-based location of past and archive.

2016, earthenware, oxidation, raku sculpture clay raku fired, ceramic decals, 60” x 60” x 8” variable mobile installation, photo: Heidi McKenzie Body Interrupted. This is my first use archival imagery, that of my father from 1940-1958 using iron-oxide waterslide decals on clay on one side of each tile. The documents my father’s life pre-post immigration. I use glaze under the decal, before developing the technology to apply ceramic decal directly onto porous bodies.

2017, porcelain casting slip with ceramic decals, solid sepia tone is acrylic paint, oxidation, 5.5” x 5.5” x 5.5” each of 21. Postmarked: A pivotal self-reflexive abstract self-portrait, using images of myself as a child, literally in the corners of the tetrahedrons, and more prevalently iconic Canadiana on the larger faces of the polyhedrons. The underscores the unconscious challenges of growing up as “other” in a monolithically white city, Fredericton, New Brunswick.

2019, porcelain ceramic substrate and iron-oxide ceramic decals, oxidation, 24” x 16” x 4.5”, photo: courtesy of Latcham Gallery, Canada. House of Cards: The metaphor of a house of cards and the medium itself underscores the fragility of my father’s life as an immigrant, the precarity of his desire to build a home for his family in Canada, and racism he faced within his second exile from Trinidad to Canada.

Heidi McKenzie - “In My Bones”

2019, coil-built, earthenware, glaze, ceramic decals, oxidation, 20” x 23” x 6.5”, photo: Ali Kazimi In My Bones: These pieces stem from a series of work begun in Australia, 2017, where I explored “spaces within” inviting non-western communities into the otherwise Eurocentric genre of modernism. The images of indentureship and colonialism mark the abstracted vertebrae of my body and my life – a past I cannot ignore or escape.

Heidi McKenzie - “In My Bones” (detail)

2020, hand-pressed hand-made low-fire porcelain iron-oxide decals on frosted plexiglass, wood, steel, oxidation, 64” x 34” x 1”, photo: Dale Roddick. Division: Playing on the function of the object to divide, the work evokes a piece of furniture which might have been in the drawing rooms of the plantation owners, yet the archival imagery on the divider tell the story of the grim, often inhumane living conditions of the indentured servants. 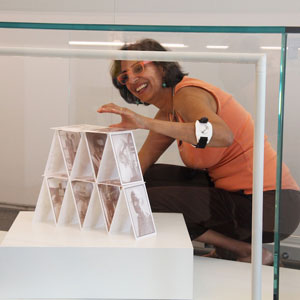 My studio practice engages issues of identity and belonging. Through abstract portraiture, I explore the everyday lived experience of my mixed-race ethnicities. I began incorporating photography with clay in 2014 to viscerally depict the fragmentation of my body. I subsequently moved on to investigate image as archive. This series of work speaks to my personal histories through photographic imagery coupled with abstract representation. In the 19th century, my ancestors, settlers, migrants and immigrants, travelled from Ireland to the Americas, and India to the Caribbean in hopes of a better life. In the mid 20th century, my parents married at a time when interracial marriages were illegal in several American states and extremely uncommon in both Canada and the U.S. I grew up on the East coast of Canada, one of a handful of brown faces in a sea of white, at the corners of “Canadianness.” Holding space and making place for people of color matters. Rendering the chronicles of the marginalized through clay, matters. Telling my family’s stories, matter.

My recent work seeks to reinvigorate modernism through abstraction using form as metaphor to underscore my ancestral heritage as well as those of the forgotten or often-overlooked. It documents the inheritance of colonial trauma through archive by imprinting iron-oxide on ceramic. It renames, reclaims, reshapes and re-worlds my lived experience, decolonizing “the white cube.” I ask the viewer to consider, acknowledge, understand and transmute in contemporary times the ongoing legacies of class, caste, race, migration and colonialization.