2006, Installation, with performance and soundscape

J.J. McCracken - "Thirst, and the Martyr"

2010, Archival pigment print, from installation with live activity and soundscape

2010, Archival pigment print, from installation with live activity and soundscape

2010, Installation with live activity and soundscape

2008, Installation with live activity and soundscape

2008, Installation with live activity and soundscape

2004, Archival pigment print, Leatherhard pottery canned in corn syrup; the activity of canning pottery was originally a performance, with soundscape 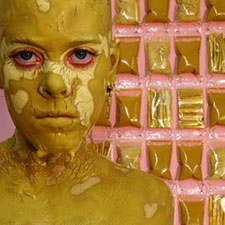 Focusing on the Living Experience—making & consuming, loss, the passage of time—J.J. McCracken constructs immersive installations. McCracken’s landscapes are composed of earth materials and activated by sound, smell, taste, and living models that move through them, focused on tasks they’ve been assigned. Sometimes, repeating cycles of productive activity yield accumulation—and then things fall apart. Other times, consumption is incessant but drones on, unable to satisfy. In McCracken’s work, there is (so far) always a foil for the notion of achievement, and there is (so far) always a reflection of the cycle of life.

Older projects include Living Sculpture, a series of separate but interacting vignette stages built to house individual performances. Task-based activity cycles through making/un-making. Time markers that form flexible but regular intervals are made visible/audible through labor and product, and then subsequent decomposition. Time itself appears to progress, invert, and suspend simultaneously.

Through an ongoing series of sketches she calls Slip/Skin Studies, McCracken explores thoughts about consumption and loss. There is often an attempt to recapture something missing, or a grasping at something just out of reach. Witness to the Passing of the World uses repetitive searching and discarding, and closes with a final act of gathering what is leftover as the action begins to subside. In the end, the discarded becomes the embraced.

Hunger, Philadelphia, McCracken’s most recent project, uses geophagy (clay-eating) as a launching point for a visual poem about need. Geophagia occurs worldwide, problematic only in countries suffering severe food crises. During the exhibition, clay-covered models move through an arid, monochromatic landscape eating clay casts of fruits and vegetables. The excessive consumption of a visually bountiful but non-nutritive food substitute is central to the main idea of the project.