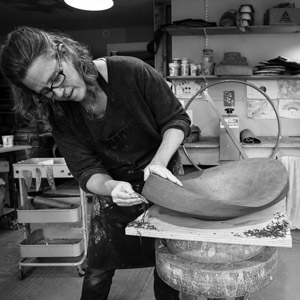 Using the vernacular of the vessel, I use earthenware clay to create ceramic sculpture and utilitarian pottery. Each form employs a language that reveals its intentions. My interest lies in the slight shifts within the arc of a bowl that determines the nature of the containment. Looking to primitive objects that have a contemporary relevance, I pare down forms and exaggerate isolated elements accentuating their sense of generosity and strength. Hollow construction allows for exaggeration of features, contributing a visual weight that floats above the table. A bowl that curls back on itself may seem shy and protective, while the force of a gentle upward turn of its lip invites a more active investigation of the object. Formed through repeated scraping and pinching, building up and finally excavating the appropriate curve, each piece retains the history of its making. Layers of glaze soften these individual marks, bringing more clarity to the form. The surface becomes a way to manipulate scale, moving from intimacy to expansion, in the way one understands a landscape by knowing both the small stone at one’s feet and the bulk of the mountain far away.

Jerilyn Virden is currently a studio artist living in Greensboro, Vermont. Together with her husband, glass artist Devin Burgess, they run Borealis Studios, which houses a ceramic studio, Glass studio, and gallery. She was an artist-in-residence at Penland School of Crafts from 2001-2004 and remained in that community until moving to Vermont in 2011. She received the Society of Arts and Crafts Artist Award In 2014 and in 2006 she received a North Carolina Arts Fellowship Grant. She earned an MFA from Southern Methodist University in 2001, and a BFA from West Virginia University in 1997 where she studied abroad at the Jingdezhen Ceramic Art Institute in China. Before attending graduate school she completed a two year assistantship at the studio of Silvie Granatelli, in Floyd, Virginia. Her work has been exhibited at the Mint Museum of Craft and Design and she has work in multiple permanent collections including that of the Asheville Art Museum and NCECA. To learn more about Jerilyn Virden and see more images of her work, please visit www.borealisstudios.com.