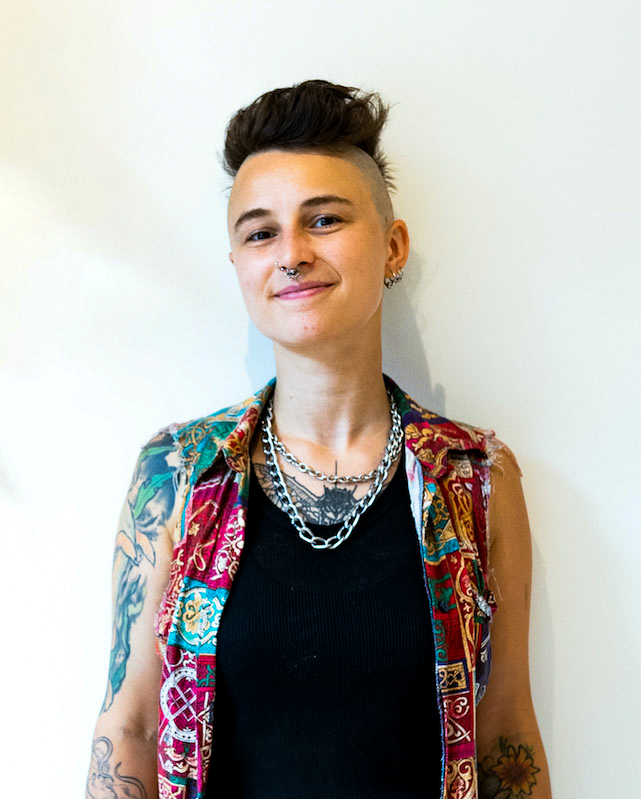 Jess Sallay-Carrington is a figurative ceramic sculptor creating works about human behaviour and emotions using anthropomorphic creatures. Reflecting on their queer and non-binary gender identity, Jess creates sculptures which challenge and analyze the dominant heteronormative and cisgendered society. They question the role that these identities have in forming an individual’s character, personality and placement within their culture. Jess’s sculptures speak to a feeling of “otherness,” but not necessarily of physical traits that can be immediately viewed by the public. These identities exist within, they are either shared or kept a secret. The zoomorphic qualities of their sculptures shed light on those human characteristics hidden from the naked eye. As each animal comes with its own biological qualities, as well as the myths and stories associated with them, when anthropomorphized, their addition creates a deeper understanding of that individual’s persona.

The inclusion of zoomorphism in Jess' work display’s the hidden parts of human identities. Using animals to represent certain human behaviour and emotions, as every animal comes with its own story and associations. A creature that, through sculpture, exposes a part of the figure’s character which might not be apparent at first glance.

Jess Sallay-Carrington is a sculptural ceramic artist originating from Vancouver BC but spent the last decade living and working in Montreal QC. Jess is a queer and non-binary artist. In 2014 they graduated from Concordia University with a BFA in ceramics. Jess has attended many artist residencies, traveling around North America and Europe. Residencies such as C.R.E.T.A Rome, Torpedo Factory Art Centre, and Tolne Gjæstgivergaard. They have been a part of many group exhibitions, at galleries such as the Canadian Clay and Glass Gallery, C.R.E.T.A. Gallery, and the Clay Center of New Orleans. Jess has had several solo exhibitions in recent years, such as NuQueer Power at Fatale Art Gallery, Co(R)vid Calluses at Galerie ERGA, as well as an upcoming exhibition called Adapting, at Maison de la Culture Côte-des-Neiges. They have been featured in publications such as CBC Exhibitionists, New York’s ArtTour International Magazine, and Ceramique: 90 Artistes Contemporarian. Jess has been awarded grants from SODEC and CALQ, as well as being a finalist for the Winifred Shantz Award for 2020 and 2021. Jess is pursuing their Masters Degree at the University of Washington, to be completed in 2023.