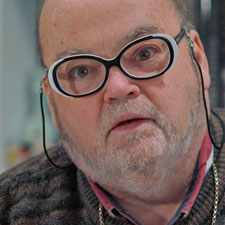 The sources that nourish and stimulate my artistic output emanate primarily from the ceramic lexicon. The conscientious use of exact and pre-established parameters enables me to arrive at a synthesis that is unquestionably ceramic in origin, which ultimately transcends the category without disavowing it.

The major formal preoccupation characterising my artistic output is not self-expression.

I am not aiming to create new forms, but rather I am pursuing an artistic and intellectual quest to develop and set up singular and relevant conceptual frameworks for ceramics as an autonomous art form. My objects are formal and material embodiment of this obsessive and rigorous exploration.

My sculptures are about ceramics and images, not pots about pots. More precisely, they are ceramics as ceramic images. As such, they brave the fine arts’ prevailing hierarchies. I am constantly aiming to construct auto-referential ceramic images that radically transform the nature of the objects into abstractions.

The ceramic objects that I formulate are more than things. Conceptually, they are abstractions, because they have lost their intrinsic reality. In this process, they have acquired a new one.

I am not concerned with the real thing, but with the idea of the thing itself.

The lid acknowledges the intrinsic void of vessels and at the same time the specificity of the ceramic object. It covers a blackened circumscribed area, a two-dimensional strategy, affirming both the presence and absence of the volumetric. The act of confronting the flat and the sculptural stresses the inherent conceptual identity of containers and demonstrate their singularity as authentic sculptures of ceramic origin and lineage.

The mounts are decidedly eccentric settings, which could be interpreted as three-dimensional frames. Even if they are external parts, their integration is total. It is each specific structure that determines the final image. They are absolutely not neutral or decorative components (as is usually the case for picture frames). Here they set the content. On the one hand, they distance the object from its inherent materiality (CLAY), and, on the other hand, establish a connection with the history of ceramics removed from the craft practice.

The narrative in my work, when present, is not concerned with story telling. Its role is political. It mocks or ridicules the expected narration found in the prototypes to destabilize the viewer and especially call attention to the function it has in the evaluation of art. Far from being part of a decorative agenda, the surfaces are mnemonic and are utilized to affirm and confirm the ceramic character of the object or to negate its inborn substantiality.