Thrown and altered stoneware and glaze, 2015 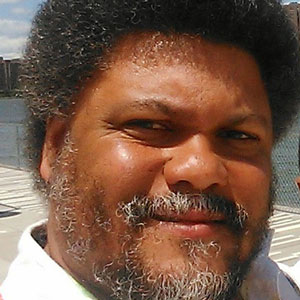 Smith is guided by improvisations that merge the graphic with form in the round. His work rely on wheel-thrown and hand-built forms, most commonly presented as abstractions of cups, bottles, and vases. His studio interests concern drawing and 3D printing as well. The clay work is inspired by the intersections of, graffiti art, comic book Illustrations and jazz.

Malcolm Mobutu Smith is Associate professor of Ceramic Art at Indiana University in Bloomington, Indiana since. He earned his MFA from the New York College of Ceramics at Alfred University in 1996 and he studied at both the Kansas City Art Institute and Penn State University receiving where he earned his BFA in ceramics in 1994. Smith’s professional activities include workshops, lecturers and residencies including visits to Haystack Mountain School of Craft, Watershed Center for Ceramic Arts, and the Robert McNamara Foundation also in Maine. His works are represented at The Luise Ross Gallery, New York City and are held in numerous private and public collections including, the Nerman Museum of Contemporary Art in Kansas City, FuLed International Ceramic Art Museum, Beijing, China, Haan Musuem and Indiana State Museum.