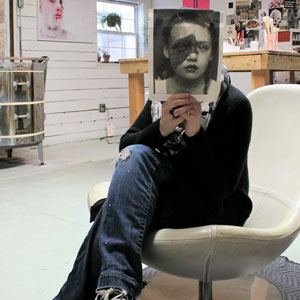 Margaret Meehan’s work is a research-based, multidisciplinary exploration that pulls from film, music, popular culture, folklore, and traditional crafts. She considers the origins of outcasts through their representation – in particular, the tendency for women and societal “others” to be seen as monsters. Her research includes teratology and medicine, ornithology, the esthetics of cuteness, materiality in high and low culture as well as modes of feminist protest. This all stems from her curiosity about the lines that separate what is protected from what is feared and how gendering plays into these expectations.

Margaret Meehan is interested in the body. Not necessarily in how it works, but more in how it has been perceived throughout history. Born with a congenital birth defect in the 1970s during 1st wave feminism and educated in the 1990s during the emergence of 3rd wave feminism and the Riot Grrrl movement, she is drawn to cycles of representation concerning physical difference and gendering. Her work has been shown at ArtPace San Antonio, the Modern Art Museum of Fort Worth, The Dallas Museum of Art as well as Soil Art Gallery in Seattle, Flowers Gallery in London, David Shelton Gallery in Houston, Conduit Gallery in Dallas, Texas and Ulterior Gallery in New York, NY. Awards and residencies include the Nasher Sculpture Center Microgrant (2015), Artpace, San Antonio, TX (2014), The Lighthouse Works Fellowship, Fishers Island, NY (2013), Bemis Center, Omaha, NE (2009), the Dozier Travel Grant, Dallas Museum of Art, TX (2008). Her work has been featured in the Guardian, Sculpture Magazine, Patron Magazine, Pastelegram and Artforum, among others. She currently lives in Richmond, VA.