2006, Installation with unfired clay, potterswheel, wallpaper and poster. The mountain starts to turn when someone enters. Size depends on space available 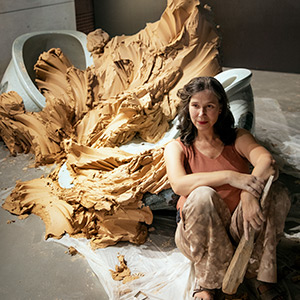 Elusive! At the core are things!”

How do we create art?

My own creative processes lead repeatedly to existential questions. Currently I am exploring such themes as chaos and order, form and emptiness, matter and energy. A prequel to verbal answers lies partly within the Western philosophy of science but often more clearly for me in Eastern thought.

Nature, material which is constantly shifting, is central to Chinese philosophy and so matter is a recurring theme - as revealed in my works pertaining to “mountains” and to “scholar rocks”. The notion of the mountain is associated in the Western mind with the physical, with gravity. In the Oriental approach on the other hand, the mountain expands man’s spirituality and underlines his impotence.

My investigation of matter leads inevitably to the study of chaos vs order while the actual process of creation demands a return to chaos.

Marieke Pauwels is Master of Visual Arts and currently MAD-faculty Head of Department of Ceramics. She recently commenced research at MAD-faculty & UHasselt.

Since 1989 Pauwels has exhibited at home and abroad, testing the conventions of her medium with performance art and winning a number of coveted international awards. A welcome guest speaker on the role and the future of Ceramics in Contemporary Art, she has lectured in Austria, China, Germany, Japan, the Netherlands and the UK. Residencies in Japan, the Netherlands and China continue to inspire her work. Pauwels has worked for nearly three decades as a teacher in Art Education. A number of articles on her work have been published.