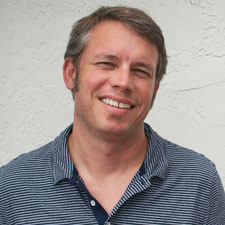 I seek harmony in my surroundings, moments of respite from the rush and concerns of daily life. I find a sense of calm in the emotion expressed in a song, muted colors in nature and art, and drinking coffee from a handmade cup. The synthesis of my research in post-modern architecture, abstract painting, and experimental music culminates in my utilitarian pottery. Each of these influences contain the element of abstraction, an austerity and restraint in form, and an intentional trajectory for moving the body, eye, or psyche through space. Grounded architecturally inspired forms communicate stability, while cantilevered components act as a counterpoint to their mass. Visual chords of color establish a harmonized background. Architectural features punctuated with vivid color conduct the viewer’s eye around the piece and settle into a mellow mid-tempo beat.

The functional parameters of the vessel allow me to achieve two important goals: offering individuals an interactive experience through use, and questioning the aesthetic conventions of the archetypal pot within the framework of utility. A surprising rendition of a familiar pot strikes the viewer with a feeling of discovery, enticing a closer investigation through sight, touch, and interaction.

Geometric forms combined with painted color become utilitarian 3-D Color Field paintings. Vessels and groupings reference skyline and double as musical phrasing or waveforms of sound. Both architects and potters are fundamentally engaged in designing functional space. Architecture holds people; people hold pottery. Like the sentiment in a song, I instill calmness in my vessels to be experienced through use and contemplation within people’s hands and homes.

Marty Fielding became captivated by clay as an anthropology major at the University of North Carolina at Greensboro. He continued his study of ceramics as a teaching assistant at Penland School of Crafts and received an M.F.A. from the University of Florida.

Fielding’s work has been included in invitational and juried exhibitions locally, nationally and internationally such as Strictly Functional and The Zanesville Prize.

Marty teaches at Florida Atlantic University and his teaching experience includes adjunct positions at Ohio Northern University and Middlebury College and several community studios including Frog Hollow in Middlebury, Vermont where he was Resident Potter. He has taught workshops including Southern Illinois University at Edwardsville, The Potter’s Council Workshop in San Diego, and Truro Center for the Arts on Cape Cod.

His work has been published in several books as well as Ceramics Monthly, Pottery Making Illustrated, and Clay Times.