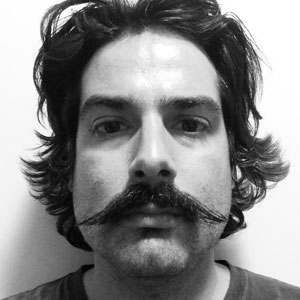 My work focuses on the creation of illusory acts of tension between what is seemingly organic in form and what is clearly machined. The Organic, shaped by my hands, is illustrated in the rough surfaces and plant-like forms. These components are inspired by Nature. The Machined, characterized by the clean lines of the slip-cast objects and the plastic or clay 3D printed elements, is one step removed from my hands—formed by molds and modern technology. These parts, however, are not unnatural or inorganic. While these sleek components appear to be the offspring of the digital age, they are simply human manipulations of natural materials and processes.

When the analogue and the digital are juxtaposed, all tension fades away and the push and pull gives way to a merger. The eye beholds a single piece in which the organic and the machined coexist…in their natural states.

Matt Mitros was born in Philadelphia, PA. After graduating from Penn State University in 2001 with a BFA, Mitros completed a post-baccalaureate from the University of Illinois and holds an MFA from the University of Washington. Mitros has been an Artist-In-Residence at Arrowmont School of Arts & Crafts, the Archie Bray Foundation, and Red Lodge Clay Center. He is currently an Assistant Professor of Art at The University of Alabama.

In 2008 Mitros was an Artist Trust GAP (Grant for Artist Projects) recipient funded by the City of Seattle. Mitros was selected as a 2013 Emerging Artist by Ceramics Monthly. His work has been featured in Art in America, Art LTD, Clay Times, Ceramics Monthly, and City Arts Magazine, as well as the book 500 Figures in Clay. His work is in the permanent public collections of the National Museum of Slovenia, Bemidji State University, the Spartanburg Art Museum, the de Young Museum, The Hudgens Center for the Arts, Fine Arts Museum of Florida State University, and others.

Mitros maintains a studio in Tuscaloosa, AL where he lives with his family and two very lazy Whippets.