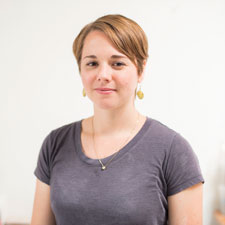 Certainly for artists of all stripes, the unknown, the idea or the form of the tale that has not yet arrived, is what must be found. It is the job of artists to open doors and invite in prophesies, the unknown, the unfamiliar; it’s where their work comes from … Scientists too, as J. Robert Oppenheimer once remarked, “live always at the ‘edge of mystery’ – the boundary of the unknown.” But they transform the unknown into the known, haul it in like fisherman; artists get you out into that dark sea. -- Rebecca Solnit, Field Guide to Getting Lost

Natasha Hovey was born and raised in New Hampton, Iowa. In 2011 she received her Bachelor of Fine Arts from The University of Iowa in Iowa City, Iowa, and in 2014 she received her Master of Fine Arts at The University of Wisconsin in Madison, Wisconsin. Hovey has recently exhibited work at Sunday Morning at the European Work Center in ‘s-Hertogenbosch, Netherlands, Glassell School of Art within The Museum of Fine Arts in Houston, Texas, and the MANA Contemporary in Chicago, IL. Hovey has been an Artist-in-Residence at Sunday Morning at the European Work Center and the Houston Center for Contemporary Craft. She has been awarded the University Wide Fellowship at the University of Wisconsin, the Iowa Center for the Arts Council, and The University of Iowa Emerging Artist Scholarship. Hovey is currently an Artist-in-Residence and Adjunct Professor at Midwestern State University in Wichita Falls, TX.