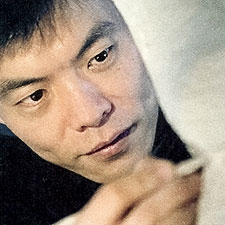 For the last several years, I have addressed in my work the central relationship between my mother and myself. Twenty some years ago, my mother fell into Parkinson's disease. As the only son in my family and in accord with the tradition of Chinese culture, it comes to my role to take full responsibility of her and be strong. As a result, my relationship with my mother has grown. I encourage her with love and warmth. May 7th, 2003, my mother has left her physical body and she is in God’s hand now. Her love has been around as always and she has more to offer. The bond is strong that constructs my work of the mother and child.

His education background includes both ceramics sculpture and music. He also graduated with a Bachelor of Music degree in voice. His sculpture expresses the crossed boundaries between Eastern and Western culture and aesthetics. His sculpture is also the testimony of his faith”.