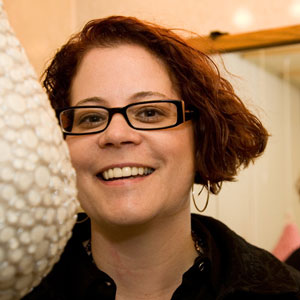 “In an increasingly mediated world, one of the most radical things artists can do is to use their hands, especially in the transformation of matter in its most telluric forms: earth, stone, wood, pigments, and oil." – David Levi Strauss

The mark and history of the hand play important roles in my philosophy, practice, and process as an artist and throughout my life. I work in clay for its distinct physicality quality of malleability, which allow gesture and touch to be imparted with immediacy and subtlety, as well as its pre-historic origins and being directly from and of the earth. I juxtapose and combine these forms and materials with contemporary industrial materials, embracing geometry and structure within the language of my work. The final surfaces are typically vibrant, heavily textured, and mysterious. They elicit a desire to touch and investigate further, which is of course, my own motivation in the making.

I’m interested in alchemy, the history of objects, and in the relationship between nature and the manmade. The desire to transform these relationships, at times to make them more harmonious, at others to create discord, is at the center of my life and practice as an artist. This is a morphological art, which is an intrinsically optimistic approach, in my view. While I develop each series of nuanced pieces, time and space for experimentation and play remain constant, essential elements in my studio practice. While I often set parameters to guide the development of a series or body of work, intuition continues to play a significant role in consideration of texture, form, scale, and color. While the work is certainly painterly, it is important for the sculptures to operate in the world of objects. Sculptures require a viewer in motion and are never completely available, visually. I am drawn to this elusive and mysterious characteristic of sculpture.

Titles carry important information and help develop meaning in my work. Sculptures are titled two-fold, they are first descriptive with a prefix of their process of making accompanied by the name of the glaze utilized. The ceramic works “Paddle and Pinch” and “Mallet and Burrow” reference the action imparted to construct those works; they can be interpreted as vessels, with references to the body.

I further these pairings by creating interesting juxtapositions of color. Color elicits feeling; it is about desire. It has symbolic meaning and psychological weight. Sometimes cringe worthy and garish, the boldness of color has become as salient as the form of the work.