Roxanne Jackson - “Bark At The Moon” 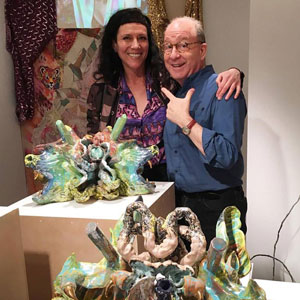 In ceramic Alienware series, the artist flays open the heads of beasts to reveal the undulating ridges of their hard palates flanked by gilded fangs. Anatomy is intentionally garbled: brain matter spills out like disemboweled intestine; a nose resembling a sacrum turns an oral cavity into a pelvic bowl; canine ears echo the wings of a sphenoid bone inside an extraterrestrial skull...her surfaces reinforce the duality of her figures: lethal horns are finished with pearlescent glaze and pierced through with gold….hoops; fascia is patterned like sitting-room wallpaper. The soft becomes hard, the visceral becomes ornamental, beauty and ferocity commingle.

-- Jennifer Rabin. Art Critic, Artist. Excerpt from the essay for the exhibition Mother at the Art Gym in Oregon

In my work, I explore themes of extinction, death and transformation. I am fascinated with the natural processes of decay and destruction. Nature is referenced not by depicting the virile stag, but by illustrating its inevitable decay. Valuing macabre sensibilities, my work is also seasoned with inspiration derived from both the banality of pop culture and the idiosyncrasies of different subcultures. The final result may seem uncanny or black-humored.

Occasionally I appropriate imagery from horror films, particularly the moment of transformation—when a human becomes a beast. This transgressive imagery creates irony and tension in the work, especially when produced from the medium of clay, which has strong historical ties to comfort and beauty. Rooted in traditions of pantheism and superstition, the horror movie depicts a dark side of human nature. Mutated creatures are created in the murky depths of our collective subconscious. These images ride the boundary between animal and human, instinct and reason, the conscious and the subconscious.

The animal (or human) figure is used as a point of departure, so that I may distort, abstract or scrutinize it. For instance, in my Alienware series, I deconstruct an image of a domestic cat and a snake to depict the internal duality of the beautiful and the beastly rooted in Jungian psychology. Domestic cats offer furry, lovable companionship and are a common subject of kitsch. Kitty-themed tchotchkes are ubiquitous, thriving in the form of figurines and cookie jars. Meanwhile, snakes are collectively misunderstood as merely venomous and loathsome—in J.K. Rowling’s Harry Potter series, for instance, images of snakes are used effectively in the creepy tattoos that identify Lord Voldemort’s allies. According to the accepted quotidian beliefs of the Western populace, the cat is cuddlesome while the snake is inherently evil. However, when a cat becomes frightened, it transforms into a more beastly animal: fang teeth revealed, ears pulled back, hissing. In contrast, a coiled, sleeping snake is in a vulnerable state, and resembles a harmless lap cat. I have chosen these two animals in order to better mock the mythos of popular culture; the mash-up of these images, with an added touch of the alien, creates something sublime and unhuman.

Made with "crafty" media, such as papier-mâché, ceramics, marbled paper and yarn, other works are inspired by feminine retro-beasts, such as harpies, sirens and Medusa; these archaic figures are combined with imagery found in present-day subcultures. For instance, Harpy (2013) draws on neoshamanism and black metal, a subgenre of extreme metal music. Additionally, Heartbreaker Bong (2015) is heavily influenced by antiquated mermaid folklore and circus sideshow culture from the mid 1800's, in which Fiji mermaids were a prominent fixture; my version of these monstrous figures appropriates this folk art tradition and re-creates this profound myth. And the Yeti paw, Money To Burn, draws from contemporary manicure culture, a postmodern gesture that echoes what T.S. Eliot called the manipulation of a “continuous parallel between contemporaneity and antiquity.” This provocative work juxtaposes the old and the new, the real and the fabled, the kitsch and the grotesque.

Roxanne Jackson is a ceramic artist and mixed-media sculptor living in Brooklyn, NY. Her macabre works are black-humored investigations of the links between transformation, myth, and kitsch. Press for her work has appeared in The Huffington Post, Hyperallergic, The New York Times, Gothamist, Sculpture Center Curators’ Notebook, Beautiful/Decay, ArtSlant, Brooklyn Magazine, Whitehot Magazine, The L Magazine, Eyes Towards the Dove, Ceramics Monthly, Ceramics Ireland, and New Ceramics, among others. She has been an artist in residence at the Bemis Center for Contemporary Arts, Socrates Sculpture Park, the Wassaic Project, the Ceramic Center of Berlin, Hunter College, Chashama: chaNorth, Watershed Center for the Ceramic Arts, Oregon College of Art and Craft, and the Pottery Workshop in Jingdezhen, China, funded by an NCECA International Residency Fellowship. Her work has been exhibited in New York at SPRING/BREAK Art Show, Honey Ramka, Lu Magnus, Denny Gallery, Zürcher Gallery, Orgy Park, Regina Rex, Catinca Tabacaru Gallery, The Lodge Gallery, Outlet, 99 Cent Plus Gallery, the Parlour Bushwick, Brooklyn Academy of Music, English Kills, the Knockdown Center, BRIC, and Airplane Gallery, as well as at the Satellite Art Show in Miami Beach, FL; the Mütter Museum in Philadelphia, PA; the Minneapolis Institute of Art in Minneapolis, MN; the International Cryptozoology Museum in Portland, ME; the Hunterdon Art Museum in Clinton, NJ; and more. She has shown in China, Portugal, Romania, Canada, and such cities as London, Berlin, Vienna and Leipzig. Most recently, her work has been included in Salon Zürcher in Paris, France, and shown at Mathilde Hatzenberger Gallery in Brussels, Belgium. Jackson is the cofounder of NASTY WOMEN, a national/international art exhibition and fundraising project; and Heather Metal Parking Lot, a nocturnal outdoor heavy metal party, held each summer at the Wassaic Project in Wassaic, NY.