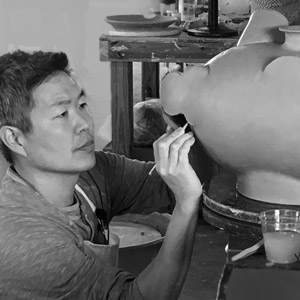 I work within the context of the vessel to exploit its universal identity and impart my own vision of merging historical, contemporary and cultural influences. I am curious about finding relationships between various forms of creative expression ranging from art, traditional craft to design. When I combine these oftentimes disparate relationships, they bring forth a new object that is intended to provoke one’s perception of what is familiar versus what is new.

My most recent work draws influence from Korean art and design. Clouds are a ubiquitous symbol depicted in traditional Korean art. I am interested in the way in which clouds represent a phenomenon that is constantly in flux. Their nature to morph and adapt is similar to the way in which I relate to my own floating sense of identity. These cultural references are intended to serve as an anchor to point towards my own ethnic lineage, but also question my perception of belonging within or outside of it.