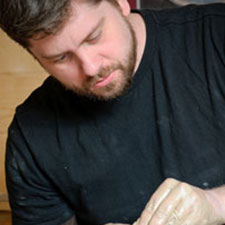 Recently, I’ve been producing two separate but related types of pottery. The wood fired work is often dark and rustic in appearance, evidence of both the process of shaping wet clay and its transformation through fire. These pieces are unglazed when placed within the kiln, but over the course of the firing they are marked by wood and heat, melting ash, and charcoal. The second type I’m making is white glazed pottery. These pieces explore color by minimizing it and may suggest purity and clarity while maintaining surface textures that seem idiosyncratic and imperfect. They are mysterious and enigmatic in ways that are familiar: opposing elements that strive for a rational ideal while remaining essentially flawed and vulnerable.

In both types of pottery I attempt to strike a balance between the wild and mysterious character of our environment and that part of our psyche that sets us apart from it. Both contain contradictory elements that provoke a sense of mystery and gravitas (soberness, weight, and grief) and may suggest something of our nature that is just on the other side of consciousness.

Samuel Johnson was born on the Eastern prairie of the Red River Valley in 1973. After studying painting and ceramics at the University of Minnesota at Morris, he served a three and half year apprenticeship in pottery under Richard Bresnahan. In 2000, he was invited as a guest of Denmark’s Design School to study Scandinavian Ceramic design in Copenhagen; while also working at the International Ceramic Center in Skaelskor and as an assistant in private porcelain studios. After working for a short period in a studio in New York, he traveled to Japan as a studio guest of Koie Ryoji. In 2005, Johnson earned graduate degrees in fine art from the University of Iowa. He is currently an Assistant Professor of Art at the College of Saint Benedict and Saint John’s University in South Central Minnesota.