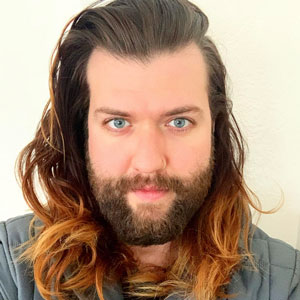 My work is thrown on a potters wheel as well as constructed using hand building techniques. I deliberately leave evidence of my hand in each piece by creating intuitive marks into the clay.

My surfaces are inspired by early 20th century minimalism and painters associated with Bauhaus, while my forms are influenced by early traditional Korean and Japanese functional pottery. I build visually intriguing layers on each pot's surface through texture, layering of slips, and painterly brush strokes. My surfaces consist of a thin white slip poured or dipped over red or brown clay. I then fire to cone 1 with the addition of pops of colorful underglaze and a final coating of clear glaze.

Samuel Thompson is a potter working in Appleton Wisconsin. He attended Maine College of Art and graduated in 2013 with a bachelors of fine art degree in ceramics. Sam was hired by Maine College of Art to work as their ceramics department technician, studio manager, and TA for three years. In 2016 Sam moved to Asheville North Carolina and work for Michael Hunt and Naomi Dalglish at Bandana pottery where he learned about running a working studio and experimenting with raw local clays, he also was a studio artist at the Clay Space ceramic studio and gallery in Asheville’s River Arts District. Sam has participated in gallery shows around the country, including the Companion gallery, Humboldt TN , Clay AKAR gallery, Iowa city IA, The Charlie Cummings gallery, Gainsville FL, and many more. He has also received a residency at Penland School of arts and crafts as well as a recipient of the Belvedere Artist Grant.