Savia Mahajan - “Remains of a continent-1”

Savia Mahajan - “Remains of a continent -2” 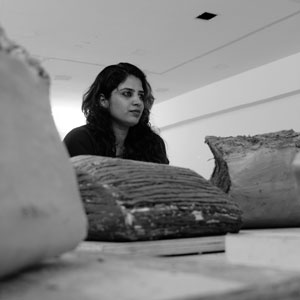 I was in constant search of a new material, an intimacy with which I could express myself

A material that translated my existential inquiries of birth, death, rebirth and its thresholds.

I wanted to create works that I have lived through; the wounds, the darkness, the horrific beauty, the impermanence of life itself.

I wanted all that was resident in me to have a resonance in my practice.

I found Clay! To me it is Mass. It is a release of energy; an animistic element.

It shares the very same paradoxical qualities I was looking for, of strength and fragility, creation and destruction.

Savia Mahajan began her formal artistic training in her home city of Mumbai, at the L.S. Raheja School of Art. Though she trained as a painter, since 2010, Savia’s practice began moving away from the medium of painting, towards ceramics. The transition was the result of a “relinquishing of traditional art mediums (and) a deeper inquiry about practice.” She has since, worked extensively at a local pottery studio in Mumbai, which has given her the space to experiment and develop many of her ceramic processes and techniques.

These developments in Savia’s practice resulted in “Liminal” – her first solo exhibition at TARQ in September, 2017.

Savia has participated in the Indian Ceramics Triennale, in Jaipur in August 2018