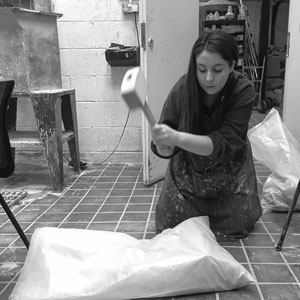 My research this year engages with Ireland’s most recent past in response to the recession in Ireland. The body of work explores instability and fragility. I investigated ghost estates, empty office blocks and vacant retail spaces. Looking at the housing crisis and economic collapse led me to ideas of instability, and fragility of the country but also the population’s lives and livelihoods. Looking more specifically at traditions of Ireland and the people’s customs the culture of tea.

My process has been to gather used teabags, these mundane objects bare witness to the conversations had and not had holding the memories, and worries of those who used them. After collecting, hanging and drying out the teabags I have now began to cluster and immerse in slip clay, after firing they are cut sharply to expose these organic shells characteristics of fragility between the connections made balanced on a delicate edge to convey a sense of instability. I intend to continue pushing these boundaries with more complex overall forms. My most recent work has evolved to become forms that resemble fossils of an archeological dig reflecting back on Irelands most recent past

The use of multiples has always been an integral part of my work, how they relate to one another to create a flow using the abundance of objects or forms. Entropy is a feature that has been emerging most recently in my work this gradual decline into a state of disorder; using the teabags, I have created clusters that contain this entropy. After having read an article on architecture Ireland entitled finding wilderness in the concrete jungle I began to research, ruin photography, The ideology of ruin value; Ruins as ‘melancholic reflections on the transience of past glory, and Ruin Porn: images that are metaphors for financial hardship and poverty.

Sophie Kate Curran is a Dublin based Fine Art Artist and Designer. She has recently completed a Bachelor of Arts in Ceramics and Glass at the National College of Art and Design. Intuitively drawn to a use of multiples, she often pursues a thematic of Identity, Memory and Relationships. Sophie’s explores concepts of fragility and instability.

Her work has been shown at Gallery Zozimus as part of group exhibitions, and Clay/works Ceramics Ireland Members Exhibition 2018/2017 at Dublin Castle.

She was recently selected to exhibit in Sculpture and Context 2018/2017 at the National Botanical Gardens, the 10th Annual Irish Ceramic Awards Exhibition at MillCove Gallery, Kenmare and the final RDS Craft Awards Exhibition in 2017.

She has won the Zozimus Purchase Award 2017, Sculpture and Context, at the National Botanic Gardens, a Future Makers Residency Award 2017 from the Design Crafts Council of Ireland. In 2018 she won, A Young Artist Development Award from the South Dublin County Council.

She will be the Irish representative at the WCC-APR Hand in Crafts,European Festival 2019, Kuwait .